Venera 1 (Russian: Венера-1 meaning Venus 1), also known as Venera-1VA No.2 and occasionally in the West as Sputnik 8 was the first spacecraft to fly past Venus, as part of the Soviet Union's Venera programme.[1] Launched in February 1961, it flew past Venus on 19 May of the same year; however, radio contact with the probe was lost before the flyby, resulting in it returning no data.

Venera 1 was a 643.5-kilogram (1,419 lb) probe consisting of a cylindrical body 1.05 metres (3 ft 5 in) in diameter topped by a dome, totalling 2.035 metres (6 ft 8.1 in) in height. This was pressurized to 1.2 standard atmospheres (120 kPa) with dry nitrogen, with internal fans to maintain even distribution of heat.[citation needed] Two solar panels extended from the cylinder, charging a bank of silver-zinc batteries. A 2-metre parabolic wire-mesh antenna was designed to send data from Venus to Earth on a frequency of 922.8 MHz. A 2.4-metre antenna boom was used to transmit short-wave signals during the near-Earth phase of the mission. Semidirectional quadrupole antennas mounted on the solar panels provided routine telemetry and telecommand contact with Earth during the mission, on a circularly-polarized decimetre radio band.

The probe was equipped with scientific instruments including a flux-gate magnetometer attached to the antenna boom, two ion traps to measure solar wind, micrometeorite detectors, and Geiger counter tubes and a sodium iodide scintillator for measurement of cosmic radiation. An experiment attached to one solar panel measured temperatures of experimental coatings. Infrared and/or ultraviolet radiometers may have been included. The dome contained a KDU-414 engine used for mid-course corrections. Temperature control was achieved by motorized thermal shutters.

Venera 1 was the second of two attempts to launch a probe to Venus in February 1961, immediately following the launch of its sister ship Venera-1VA No.1,[2] which failed to leave Earth orbit.[3] Soviet experts launched Venera-1 using a Molniya carrier rocket from the Baikonur Cosmodrome. The launch took place at 00:34:36 UTC on 12 February 1961.[4]

The spacecraft, along with the rocket's upper stage, were initially placed into a 229 × 282 km low Earth orbit,[1] before the upper stage fired to place Venera 1 into a heliocentric orbit, directed towards Venus. The 11D33 engine was the world's first staged-combustion-cycle rocket engine, and also the first use of an ullage engine to allow a liquid-fuel rocket engine to start in space.

Three successful telemetry sessions were conducted, gathering solar-wind and cosmic-ray data near Earth, at the Earth's Magnetopause, and on February 19 at a distance of 1,900,000 km (1,200,000 mi). After discovering the solar wind with Luna 2, Venera 1 provided the first verification that this plasma was uniformly present in deep space. Seven days later, the next scheduled telemetry session failed to occur. On May 19, 1961, Venera 1 passed within 100,000 km (62,000 mi) of Venus. With the help of the British radio telescope at Jodrell Bank, some weak signals from Venera 1 may have been detected in June. Soviet engineers believed that Venera 1 failed due to the overheating of a solar-direction sensor.

The USSR launches Venera 1 towards Venus. 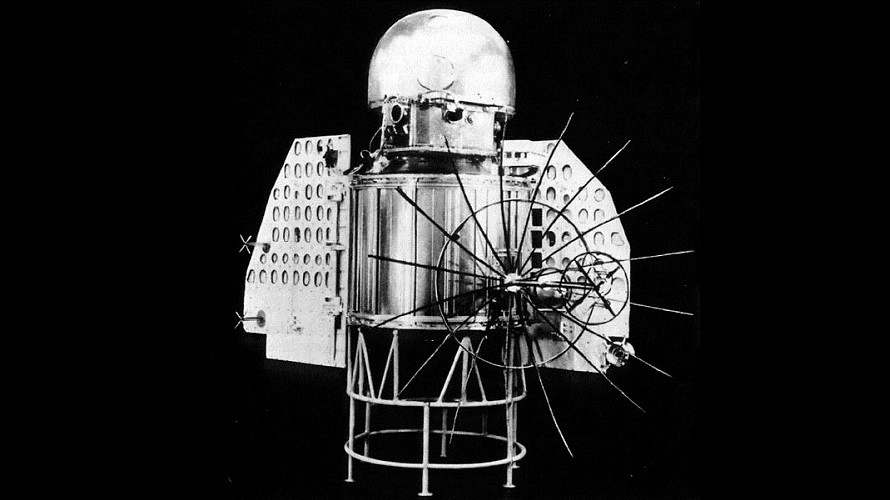 On November 16, 1965, Soviet spacecraft Venera 3 was launched. The Venera program space probe was built and launched by the Soviet Union to explore the surface of Venus. It possibly crashed on Venus on 1 March 1966, possibly making Venera 3 the first space probe to hit the surface of another planet.

The Venera Series Space Probes
The Venera series space probes were developed by the Soviet Union between 1961 and 1984 to gather data from Venus, Venera being the Russian name for Venus. The first Soviet attempt at a flyby probe to Venus was launched on February 4, 1961, but failed to leave Earth orbit. In keeping with the Soviet policy at that time of not announcing details of failed missions, the launch was announced under the name Tyazhely Sputnik “Heavy Satellite”. It is also known as Venera 1VA. Venera 1 and Venera 2 were intended as fly-by probes to fly past Venus without entering orbit. Venera 1 , also known as Venera-1VA No.2 and occasionally in the West as Sputnik 8 was launched on February 12, 1961. Telemetry on the probe failed seven days after launch. It flew past Venus on 19 May. However, since radio contact with the probe was lost before the flyby, no data could be returned. It is believed to have passed within 100,000 km of Venus and remains in heliocentric orbit. With the help of the British radio telescope at Jodrell Bank, some weak signals from Venera 1 may have been detected in June. Soviet engineers believed that Venera-1 failed due to the overheating of a solar-direction sensor.

Venera 2 also Lost
Venera 2 launched on November 12, 1965, but also suffered a telemetry failure after leaving Earth orbit. The Venera 2 spacecraft was equipped with cameras, as well as a magnetometer, solar and cosmic x-ray detectors, piezoelectric detectors, ion traps, a Geiger counter and receivers to measure cosmic radio emissions The spacecraft made its closest approach to Venus at 02:52 UTC on 27 February 1966, at a distance of 23,810 km. During the flyby, all of Venera 2’s instruments were activated, requiring that radio contact with the spacecraft be suspended. The probe was to have stored data using onboard recorders, and then transmitted it to Earth once contact was restored. Following the flyby the spacecraft failed to reestablish communications with the ground. It was declared lost on 4 March. An investigation into the failure determined that the spacecraft had overheated due to a radiator malfunction. Several other failed attempts at Venus flyby probes were launched by the Soviet Union in the early 1960s, but were not announced as planetary missions at the time, and hence did not officially receive the “Venera” designation.

The Soviet Union launches Venera 1 to fly to the planet, Venus.

Venera 1, the first spacecraft to fly past Venus, was launched by the Soviet Union on February 12, 1961.

It was the second attempt by the Soviet Union to launch a craft toward Venus that month. Its sister ship, Venera-1VA No.1, failed to leave Earth orbit when launched on February 4, 1961 due to a problem with its upper stage.

The Soviets were still moving at a good speed in the Space Race and had been enjoying accomplishments with the Sputnik and Luna programs. The February 4 failure would not hold them back.

Venera 1 was launched using a Molniya carrier rocket from the Baikonur Cosmodrome. The spacecraft’s 11D33 engine was the first staged-combustion-cycle rocket engine, and also the first use of an ullage engine.

Three successful telemetry sessions were conducted that gathered solar-wind and cosmic-ray data near Earth, at the outer limit of Earth’s magnetosphere, and at a distance of 1,900,000 km. After discovering the solar wind with Luna 2, Venera 1 provided the first verification that this plasma was uniformly present in deep space.

Unfortunately, just a week after making this discovery, Venera 1’s next scheduled telemetry session failed to occur and communication was lost. It is believed that the failure was due to the overheating of a solar-direction sensor.

On May 19 and 20, 1961, Venera 1 passed within 100,000 km of Venus. With the help of a British radio telescope, some weak signals from Venera 1 may have been detected in June but, overall, communication with the spacecraft was considered ended and any data transmitted at that point is considered lost.

Construction starts on the Gateway Arch in St Louis, Missouri.

The Gateway Arch is a 630-foot monument in St. Louis in the U.S. state of Missouri. Clad in stainless steel and built in the form of an inverted, weighted catenary arch,it is the world’s tallest arch, the tallest man-made monument in the Western Hemisphere, and Missouri’s tallest accessible building. Built as a monument to the westward expansion of the United States, and officially dedicated to “the American people,” it is the centerpiece of the Jefferson National Expansion Memorial and has become an internationally recognized symbol of St. Louis, as well as a popular tourist destination.

The Arch was designed by Finnish-American architect Eero Saarinen in 1947; construction began on February 12, 1963, and was completed on October 28, 1965, for $13 million. The monument opened to the public on June 10, 1967. It is located at the site of St. Louis’ founding on the west bank of the Mississippi River.The Arch has served as the site for multiple incidents, accidents, and stunts, and following the Oklahoma City bombing of 1995, and the September 11 attacks has received a number of security related upgrades.

The Civil War in Austria begins.