Pope Alexander III (c. 1100/1105 – 30 August 1181), born Roland (Italian: Rolando), was the head of the Catholic Church and ruler of the Papal States from 7 September 1159 until his death. A native of Bologna, Alexander became pope after a contested election, but had to spend much of his pontificate outside Rome while several rivals, supported by Holy Roman Emperor Frederick I Barbarossa, claimed the papacy. Alexander rejected Byzantine Emperor Manuel I Komnenos' offer to end the East–West Schism, sanctioned the Northern Crusades, and held the Third Council of the Lateran.

Rolando was born in Siena. From the 14th century, he was referred to as a member of the aristocratic family of Bandinelli, although this has not been proven.[1] He was long thought to be the 12th-century canon lawyer and theologian Master Roland of Bologna, who composed the "Stroma" or "Summa Rolandi"—one of the earliest commentaries on the Decretum of Gratian—and the "Sententiae Rolandi", a sentence collection displaying the influence of Pierre Abélard, but John T. Noonan and Rudolf Weigand have shown this to be another Rolandus.[2][3]

Alexander probably studied at Bologna, where Robert of Torigni notes that he taught theology.[4] In October 1150, Pope Eugene III created him Cardinal-Deacon of Santi Cosma e Damiano. Later he became Cardinal-Priest of St Mark.[5] In 1153, he became papal chancellor and was the leader of the cardinals opposed to German Emperor Frederick I Barbarossa.[6] He negotiated the Treaty of Benevento, which restored peaceful relations between Rome and the Kingdom of Sicily.[7]

On 7 September 1159, Alexander III was chosen to succeed Adrian IV as pope. A minority of the cardinals, however, elected the cardinal priest Octavian, who assumed the name of Victor IV and became the German Emperor's antipope. The situation was critical for Alexander III, because according to many chronicles of the time (perhaps exaggerating), Barbarossa's antipope received the approval of most of the kingdoms of Europe, with the exception of the kingdoms of Portugal, Sicily and Spain. However, in 1161, King Géza II of Hungary signed an agreement and recognised Alexander III as the rightful pope and declared that the supreme spiritual leader was the only one who could exercise the rite of investiture.[8] This meant that Alexander's legitimacy was gaining strength, as soon proved by the fact that other monarchs, such as the king of France and King Henry II of England, recognized his authority. Because of imperial strength in Italy, Alexander was forced to reside outside Rome for a large part of his pontificate.[4] When news reached him of the death of Victor in 1164, he openly wept, and scolded the cardinals in his company for rejoicing at the end of the rival antipope.[9]

However, the dispute between Alexander III, Victor IV and his successors Paschal III and Calixtus III (who had the German imperial support) continued until Frederick Barbarossa's defeat at the Legnano in 1176, after which Barbarossa finally (in the Peace of Venice of 1177) recognized Alexander III as pope.[5] On 12 March 1178, Alexander III returned to Rome, which he had been compelled to leave twice: the first time between 1162 and 23 November 1165. When Alexander was arrested by supporters of the imperialist Antipope Victor IV, Oddone Frangipane freed him and sent to safety in Campania. Alexander again left Rome in 1167. At first he went to Benevento, later moving to various strongholds such as of Anagni, Palestrina, Ferentino, Tusculum, and Veroli.[4]

Alexander III was the first pope known to have paid direct attention to missionary activities east of the Baltic Sea. He had created the Archbishopric of Uppsala in Sweden in 1164,[10] probably at the suggestion of his close friend Archbishop Eskil of Lund – exiled in Clairvaux, France, due to a conflict with the Danish king. The latter appointed a Benedictine monk Fulco as a bishop in Estonia. In 1171, Alexander became the first pope to address the situation of the Church in Finland, with Finns allegedly harassing priests and only relying on God in time of war.[11] In the bull Non parum animus noster, in 1171 or 1172, he gave papal sanction to ongoing crusades against pagans in northern Europe, promising remission of sin for those who fought there. In doing so, he legitimized the widespread use of forced conversion as a tactic by those fighting in the Baltic.[12]

In 1166, Alexander received an embassy from the Byzantine emperor Manuel I. The Byzantine ambassador, the sebastos Iordanos,[a] relayed that Manuel would end the Great Schism of the eastern and western churches if Alexander would recognize him as emperor. As emperor, Manuel would supply the pope with men and money to restore his authority in Italy. Alexander gave an evasive answer, but in 1168 he rejected outright the same proposal from a second Byzantine embassy. His stated reason amounted to it being too difficult. He appears to have feared Byzantine domination of Italy if the pope owed his position to its support.[13][14]

Besides checkmating Barbarossa, Alexander humbled King Henry II of England for the murder of Thomas Becket in 1170, to whom he was unusually close, later canonizing Becket in 1173.[15] This was the second English saint canonized by Alexander, the first being Edward the Confessor in 1161.[15] Nonetheless, he confirmed the position of Henry as Lord of Ireland in 1172. 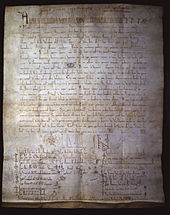 Through the papal bull Manifestis Probatum, issued on 23 May 1179, Alexander recognized the right of Afonso I to proclaim himself King of Portugal – an important step in the process of Portugal becoming a recognized independent kingdom. Afonso had been using the title of king since 1139.[16]

Even as a fugitive, Alexander enjoyed the favour and protection of Louis VII of France.[citation needed]

In 1163 Alexander summoned clergy and prelates from England, France, Italy, and Spain to the Council of Tours to address, among other things, the unlawful division of ecclesiastical benefices, clerical usury, and lay possession of tithes.[4]

In March 1179, Alexander III held the Third Council of the Lateran, one of the most important mediaeval church councils, reckoned by the Catholic Church as the eleventh ecumenical council. Its acts embodied several of the Pope's proposals for the betterment of the condition of the Church, among them the law requiring that no one could be elected pope without the votes of two-thirds of the cardinals.[17] The rule was altered slightly in 1996, but was restored in 2007. The period from 1177, which saw the submission of both emperor Frederick and anti-pope Calixtus III, and this synod/council marked the summit of Alexander III's power.[18]

Nevertheless, soon after the close of the synod, the Roman Republic forced Alexander III to leave the city, which he never re-entered, and on 29 September 1179, some nobles set up the Antipope Innocent III. By the judicious use of money, however, Alexander III got him into his power, so that he was deposed in January 1180. In 1181, Alexander III excommunicated King William I of Scotland and put the kingdom under an interdict.[19]