The Wagalla massacre was a massacre of ethnic Somalis by Kenyan security forces on 10 February 1984 in Wajir County, Kenya.

The Wagalla massacre took place on 10 February 1984 at the Wagalla Airstrip. The facility is situated approximately 15 km (9 mi) west of the county capital of Wajir in the North Eastern Province, a region primarily inhabited by ethnic Somalis. Kenyan troops had descended on the area to reportedly help defuse clan-related conflict. However, according to eye-witness testimony, about 5,000 Somali men were then taken to an airstrip and prevented from accessing water and food for five days before being executed by Kenyan soldiers.[1]

According to a commissioner with The Truth, Justice and Reconciliation Commission of Kenya, a government oversight body that had been formed in response to the 2008 Kenyan post-election violence, the Wagalla massacre represents the worst human rights violation in Kenya's history.[1]

The exact number of people killed in the massacre is unknown.[2] However, eyewitnesses place the figure at around 10,000 deaths.[1][3]

For years the Kenyan government denied that a massacre had taken place and insisted that "only 57 people were killed in a security operation to disarm the [area's] residents".[4] It was not until October 2000 that the government publicly acknowledged wrongdoing on the part of its security forces.[5]

In 2010, Bethuel Kiplagat stepped aside as chairman of the Truth, Justice, and Reconciliation Commission because of his alleged involvement in authorising the action that led to the massacre.[6][7] Reports of the number of men from the Somali Degodia sub-clan, in particular, that were detained by security forces and brought to the airstrip range from 381[8] to upward of ten thousand.[9][10]

In April 2012, Kiplagat was reinstated as TJRC chairman after the Justice Minister Eugene Wamalwa brokered a truce between him and the other commissioners.[11]

The same year, the former Kenyan Prime Minister Raila Odinga ordered an official probe into the atrocities and indicated that the national attorney general should bring to justice those responsible for the killings. Odinga also ordered a museum to be constructed in honour of the victims.[1]

In February 2015, the Wajir County governor Ahmed Abdullahi said his government would partner with local and international human rights organisations in seeking justice for the victims of the massacre, saying that the Truth Commission report offered such an opportunity which remained squandered. "Those mentioned by the TJRC report and witnesses must be prosecuted. The people who afflicted the pain to our people remain unpunished and are still with us," Abdullahi said.[12]

The film/documentary Scarred: The Anatomy of a Massacre, directed by Judy Kibinge, is the first independent visual attempt to chronicle the history of the massacre as experienced by both the victims and survivors – some of whom were government officials themselves. The documentary was launched at the National Museum in Nairobi in February 2015.[13]

Tom and Jerry make their debut with Puss Gets the Boot. 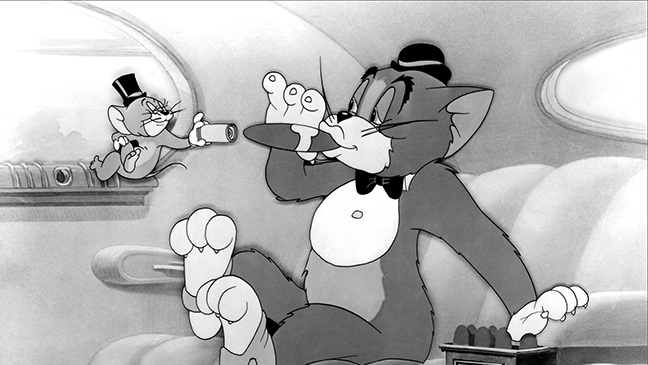 Tom and Jerry, two of the most successful cartoon characters in film and TV history, made their debut in cinemas on this day in 1940.

The cat and mouse who fight a seemingly never-ending battle for supremacy were featured in the animated short Puss Gets the Boot, made for Metro-Goldwyn-Mayer cartoons by legendary animators William Hanna and Joseph Barbera.

In the nine-minute short, Tom, a blue-grey long-haired cat, is happily toying with small brown mouse Jerry, when he is threatened with being thrown out of his owner’s house if he causes any more breakages.

Jerry then causes as much mayhem as he can to land Tom in trouble – a storyline that would provide a template for most of the duo’s adventures – and is left to celebrate when Tom is inevitably turfed out by his owner.

The cartoon was nominated for an Academy Award that year, but lost out to another MGM short. Hanna and Barbera felt they had a winning formula, which they returned to – but only after animator John Carr suggested renaming the main characters Tom and Jerry.

hey were rewarded when Yankee Doodle Mouse finally won them an Oscar for best cartoon in 1943 – the first of seven wins for their feisty cat and mouse duo.

Hanna and Barbera would write and direct a total of 114 short Tom and Jerry cartoons before MGM closed their animation department in 1957 – but the pugnacious puss and his artful mouse adversary remained popular, and would return in adventures made by other studios for many years to come. 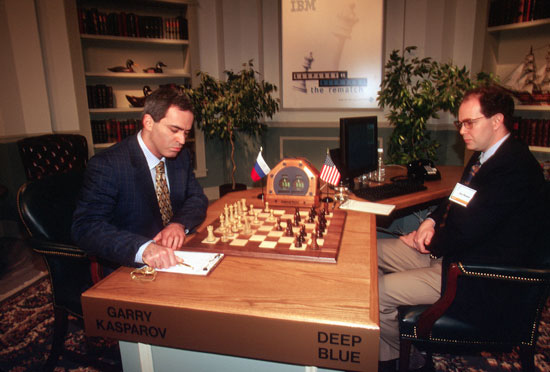 Deep Blue and Kasparov played each other on two occasions. The first match began on 10 February 1996, in which Deep Blue became the first machine to win a chess game against a reigning world champion under regular time controls. However, Kasparov won three and drew two of the following five games, beating Deep Blue by a score of 4–2. The match concluded on 17 February 1996.

Deep Blue was then heavily upgraded and played Kasparov again in May 1997, winning the six-game rematch 3½–2½, ending on 11 May. Deep Blue won the deciding game six after Kasparov made a mistake in the opening, becoming the first computer system to defeat a reigning world champion in a match under standard chess tournament time controls.

The system derived its playing strength mainly from brute force computing power. It was a massively parallel, RS/6000 SP Thin P2SC-based system with 30 nodes, with each node containing a 120 MHz P2SC microprocessor, enhanced with 480 special purpose VLSI chess chips. Its chess playing program was written in C and ran under the AIX operating system. It was capable of evaluating 200 million positions per second, twice as fast as the 1996 version. In June 1997, Deep Blue was the 259th most powerful supercomputer according to the TOP500 list, achieving 11.38 GFLOPS on the High-Performance LINPACK benchmark.

The Deep Blue chess computer that defeated Kasparov in 1997 would typically search to a depth of between six and eight moves to a maximum of twenty or even more moves in some situations. David Levy and Monty Newborn estimate that one additional ply increases the playing strength 50 to 70 Elo points.

Deep Blue’s evaluation function was initially written in a generalized form, with many to-be-determined parameters. The optimal values for these parameters were then determined by the system itself, by analyzing thousands of master games. The evaluation function had been split into 8,000 parts, many of them designed for special positions. In the opening book there were over 4,000 positions and 700,000 grandmaster games. The endgame database contained many six piece endgames and five or fewer piece positions. Before the second match, the chess knowledge of the program was fine tuned by grandmaster Joel Benjamin. The opening library was provided by grandmasters Miguel Illescas, John Fedorowicz, and Nick de Firmian. When Kasparov requested that he be allowed to study other games that Deep Blue had played so as to better understand his opponent, IBM refused. However, Kasparov did study many popular PC games to become familiar with computer game play in general.

Writer Nate Silver suggests that a bug in Deep Blue’s software led to a seemingly random move which Kasparov misattributed to “superior intelligence”. Subsequently, Kasparov experienced a drop in performance due to anxiety in the following game.

The 25th Amendment of the United States Constitution is ratified.

Prior to the passage of the amendment, nine presidents—William Henry Harrison, Zachary Taylor, Abraham Lincoln, James Garfield, William McKinley, Woodrow Wilson, Warren G. Harding, Franklin D. Roosevelt, and Dwight D. Eisenhower—experienced health crises that left them temporarily incapacitated, with death resulting in six cases. After the passage of the amendment, Pres. Ronald Reagan was incapacitated for some 24 hours while undergoing surgery for a gunshot wound resulting from a failed assassination attempt, though no official designation of presidential responsibility was ever made. Indeed, this portion of the Twenty-fifth Amendment has never been invoked.

The aircraft carrier HMAS Melbourne collides with and sinks the destroyer HMAS Voyager off the south coast of New South Wales. Eighty two people were killed.

The aircraft carrier HMAS Melbourne collides with the destroyer HMAS Voyager off the coast of New South Wales, Australia.