The Maastricht Treaty (officially the Treaty on European Union) was a treaty signed on 7 February 1992 by the members of the European Communities in Maastricht, Netherlands, to further European integration.[1] On 9–10 December 1991, the same city hosted the European Council which drafted the treaty.[2] The treaty founded the European Union and established its pillar structure which stayed in place until the Lisbon Treaty came into force in 2009. The treaty also greatly expanded the competences of the EEC/EU and led to the creation of the single European currency, the euro.

The Maastricht Treaty reformed and amended the treaties establishing the European Communities, the EU's first pillar. It renamed European Economic Community to European Community to reflect its expanded competences beyond economic matters. The Maastricht Treaty also created two new pillars of the EU on Common Foreign and Security Policy and Cooperation in the Fields of Justice and Home Affairs (respectively the second and third pillars), which replaced the former informal intergovernmental cooperation bodies named TREVI and European Political Cooperation on EU Foreign policy coordination.

The Maastricht Treaty (TEU) and all pre-existing treaties has subsequently been further amended by the treaties of Amsterdam (1997), Nice (2001) and Lisbon (2007). Today it is one of two treaties forming the constitutional basis of the European Union (EU), the other being the Treaty on the Functioning of the European Union.

While the current version of the TEU entered into force in 2009, following the Treaty of Lisbon (2007), the older form of the same document was implemented by the Treaty of Maastricht (1992).

The Treaty of Maastricht, shown at an exhibition in Regensburg. The book is opened at a page containing the signatures and seals of the ministers representing the heads of state of Belgium, Denmark, Germany and Greece

The signing of the Treaty of Maastricht took place in Maastricht, Netherlands, on 7 February 1992. The Dutch government, by virtue of holding Presidency of the Council of the European Union during the negotiations in the second half of 1991, arranged a ceremony inside the government buildings of the Limburg province on the river Maas (Meuse). Representatives from the twelve member states of the European Communities were present, and signed the treaty as plenipotentiaries, marking the conclusion of the period of negotiations.

Only three countries held referendums (France, Denmark and Ireland – all required by their respective constitutions).[3] In Ireland, the Eleventh Amendment of the Constitution, allowing the state to ratify the Treaty, was approved in a referendum held on 18 June 1992 with the support of 69.1% of votes cast.

In Denmark, the first Danish Maastricht Treaty referendum was held on 2 June 1992 and ratification of the treaty was rejected by a margin of 50.7% to 49.3%.[4] Subsequently, alterations were made to the treaty through the addition of the Edinburgh Agreement which lists four Danish exceptions, and this treaty was ratified the following year on 18 May 1993 after a second referendum was held in Denmark, where it received the support of 56.7% of votes cast,[5] with legal effect after the formally granted royal assent on 9 June 1993.[6]

In September 1992, a referendum in France narrowly supported the ratification of the treaty, with 50.8% in favour. This narrow vote for ratification in France, known at the time as the 'petite oui', led Jacques Delors to comment that "Europe began as an elitist project in which it was believed that all that was required was to convince the decision-makers. That phase of benign despotism is over."[7]

In the United Kingdom, an opt-out from the treaty's social provisions was opposed in Parliament by the opposition Labour and Liberal Democrat MPs and the treaty itself by the Maastricht Rebels within the governing Conservative Party. The number of rebels exceeded the Conservative majority in the House of Commons, and thus the government of John Major came close to losing the confidence of the House.[8] In accordance with British constitutional convention, specifically that of parliamentary sovereignty, ratification in the UK was not subject to approval by referendum. Despite this, the British constitutional historian Vernon Bogdanor suggests that there was "a clear constitutional rationale for requiring a referendum" based on the allocation of legislative power.[9][10]

At the end of January 2020, the UK left the EU and so withdrew from this Treaty. 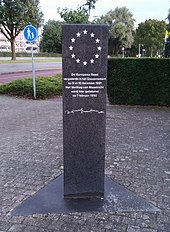 Stone memorial in front of the entry to the Limburg Province government building in Maastricht, Netherlands, commemorating the signing of the Maastricht Treaty

The treaty led to the creation of the euro. One of the obligations of the treaty for the members was to keep "sound fiscal policies, with debt limited to 60% of GDP and annual deficits no greater than 3% of GDP".[11] This obligation has not been met, with debt to GDP levels increasing steadily in most countries in eurozone since the treaty was signed with the average for the zone standing at 85%, and much higher for some countries, e.g. France, where debt to GDP ratios reached 98% in 2019, or Greece at 181%.[12]

The treaty also created what was commonly referred to as the pillar structure of the European Union.

The treaty established the three pillars of the European Union—one supranational pillar created from three European Communities (which included the European Economic Community (EEC), the European Coal and Steel Community and the European Atomic Energy Community), the Common Foreign and Security Policy (CFSP) pillar, and the Justice and Home Affairs (JHA) pillar. The first pillar was where the EU's supra-national institutions—the Commission, the European Parliament and the European Court of Justice—had the most power and influence. The other two pillars were essentially more intergovernmental in nature with decisions being made by committees composed of member states' politicians and officials.[13]

All three pillars were the extensions of existing policy structures. The European Community pillar was the continuation of the European Economic Community with the "Economic" being dropped from the name to represent the wider policy base given by the Maastricht Treaty. Coordination in foreign policy had taken place since the beginning of the 1970s under the name of European Political Cooperation (EPC), which had been first written into the treaties by the Single European Act but not as a part of the EEC. While the Justice and Home Affairs pillar extended cooperation in law enforcement, criminal justice, asylum, and immigration and judicial cooperation in civil matters, some of these areas had already been subject to intergovernmental cooperation under the Schengen Implementation Convention of 1990.

In addition, the treaty established the European Committee of the Regions (CoR). CoR is the European Union's (EU) assembly of local and regional representatives that provides sub-national authorities (i.e. regions, municipalities, cities, etc.) with a direct voice within the EU's institutional framework.

The Maastricht criteria (also known as the convergence criteria) are the criteria for European Union member states to enter the third stage of European Economic and Monetary Union (EMU) and adopt the euro as their currency. The four criteria are defined in article 121 of the treaty establishing the European Community. They impose control over inflation, public debt and the public deficit, exchange rate stability and the convergence of interest rates.

1. Inflation rates: No more than 1.5 percentage points higher than the average of the three best performing (lowest inflation) member states of the EU.

Government debt:
The ratio of gross government debt to GDP must not exceed 60% at the end of the preceding fiscal year. Even if the target cannot be achieved due to the specific conditions, the ratio must have sufficiently diminished and must be approaching the reference value at a satisfactory pace. As of the end of 2014, of the countries in the Eurozone, only Estonia, Latvia, Lithuania, Slovakia, Luxembourg, and Finland still met this target.[14]

3. Exchange rate: Applicant countries should have joined the exchange-rate mechanism (ERM II) under the European Monetary System (EMS) for two consecutive years and should not have devalued its currency during the period.

The purpose of setting the criteria is to maintain price stability within the Eurozone even with the inclusion of new member states.[11] 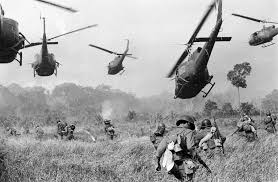 The Vietnam War was a long, costly and divisive conflict that pitted the communist government of North Vietnam against South Vietnam and its principal ally, the United States. The conflict was intensified by the ongoing Cold War between the United States and the Soviet Union. More than 3 million people  were killed in the Vietnam War, and more than half of the dead were Vietnamese civilians. Opposition to the war in the United States bitterly divided Americans, even after President Richard Nixon ordered the withdrawal of U.S. forces in 1973. Communist forces ended the war by seizing control of South Vietnam in 1975, and the country was unified as the Socialist Republic of Vietnam the following year.

Vietnam, a nation in Southeast Asia on the eastern edge of the Indochinese peninsula, had been under French colonial rule since the 19th century.

During World War II, Japanese forces invaded Vietnam. To fight off both Japanese occupiers and the French colonial administration, political leader Ho Chi Minh—inspired by Chinese and Soviet communism—formed the Viet Minh, or the League for the Independence of Vietnam. 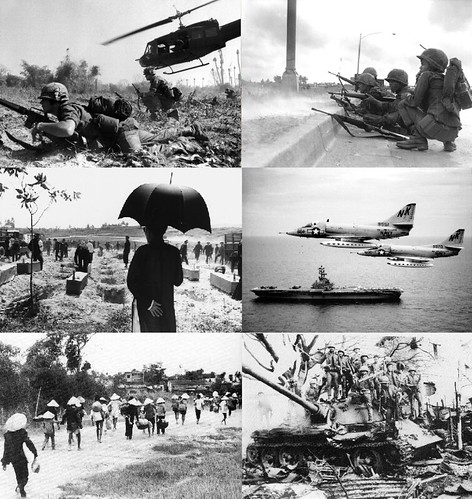 1000’s of American soldiers are exposed to the ‘Desert Rock’ atomic explosions for training purposes in Nevada.

Desert Rock was the code name of a series of exercises conducted by the US military in conjunction with atmospheric nuclear tests. They were carried out at the Nevada Proving Grounds between 1951 and 1957. Their purpose was to train troops and gain knowledge of military maneuvers and operations on the nuclear battlefield. They included observer programs, tactical maneuvers, and damage effects tests. From 16 July 1945 through 1946, about 1,000 military and civilian personnel took part in Project TRINITY or visited the test site. All participants, civilian as well as military, were under the authority of the MED. Project activities included scientific studies. Military exercises were not conducted at TRINITY.

Before the detonation, civilian and military scientists and technicians, assisted by other military personnel, placed gauges, detectors, and other instruments around ground zero. An evacuation detachment consisting of 144 to 160 enlisted men and officers was established in case protective measures or evacuation of civilians living offsite became necessary. Such action was not deemed necessary, however, and the evacuation detachment was dismissed late on the day of the detonation for return to Los Alamos.A substantial amount of activity took place at the test site during the first 3 days following the detonation, as scientists entered the ground zero area to retrieve instruments or to perform experiments.

William Shakespeare’s play The Tempest is first performed at Whitehall Palace in London.

The Congress of Vienna starts to re-draw the European political map.

Napoleon is defeated at the Battle of Vyazma