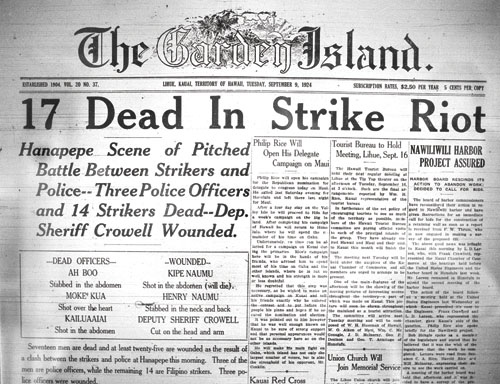 The Hanap?p? Massacre also called the Battle of Hanap?p? since both sides were armed happened on September 9, 1924. Toward the end of a long-lasting strike of Filipino sugar workers on Kaua?i, Hawai?i, local police shot dead nine strikers and fatally wounded seven, strikers shot and stabbed three sheriffs to death and fatally wounded one; a total of 20 people died. The massacre brought an end to armed protests in Hawaii.

By the 1920s, the sugarcane plantation owners in Hawai?i had become disillusioned with both Japanese and Filipino workers. They spent the next few years trying to get the U.S. Congress to relax the Chinese Exclusion Act so that they could bring in new Chinese workers. Congress prevented the importation of Chinese labor.

But organized labor in the 1920s’ U.S. mainland supported the Congress in this action, so that for a while it looked as though militant unionism on the sugarcane plantations was dead. To oppose organized labor, the Hawaiian Territorial Legislature passed the Criminal Syndicalism Law of 1919, Anarchistic Publications law of 1921, and the Anti-Picketing Law of 1923.

These laws, with penalties of up to 10 years in prison, increased the discontent of the workers. The Filipinos, who were rapidly becoming the dominant plantation labor force, had deep-seated grievances: as the latest immigrants they were treated most poorly. Although the planters had claimed there was a labor shortage and they were actively recruiting workers from the Philippines, they wanted only illiterate workers and turned back any arrivals who could read or write, as many as one in six.

By 1922 Filipino labor activist Pablo Manlapit had organized a new Filipino Higher Wage Movement which numbered some 13,000 members. In April 1924, it called for a strike on the island of Kaua?i, demanding $2 a day in wages and reduction of the workday to 8 hours. As they had previously, the plantation owners used armed forces, the National Guard, and strike breakers paid a higher wage than the strikers demanded. Again workers were turned out of their homes. Propaganda was distributed to whip up racism. Spying and infiltration of the strikers’ ranks was acknowledged by Jack Butler, executive head of the Hawaiian Sugar Planters’ Association.

Strike leaders were arrested in attempts to disrupt workers’ solidarity, and people were bribed to testify against them. On September 9, 1924, outraged strikers seized two strike breakers at Hanap?p? and prevented them from going to work. The police, armed with clubs and guns, came to union headquarters to rescue them. Filipino strikers were armed only with homemade weapons and knives.

The Associated Press flashed the story of what followed across the United States in the following words: Honolulu. – Twenty persons dead, unnumbered injured lying in hospital, officers under orders to shoot strikers as they approached, distracted widows with children tracking from jails to hospitals and morgues in search of missing strikers – this was the aftermath of a clash between cane strikers and workers on the McBryde plantation, Tuesday at Hanapepe, island of Kauai. The dead included sixteen Filipinos and four policemen.

After the massacre police rounded up all male protesters they could find, and a total of 101 Filipino men were arrested. 76 were brought to trial, and of these 60 received four-year jail sentences. Pablo Manlapit was charged with subornation of perjury and was sentenced to two to ten years in prison. The Hawai?i Hochi claimed that he had been railroaded into prison, a victim of framed-up evidence, perjured testimony, racial prejudice and class hatred. Shortly thereafter, he was paroled on condition that he leave Hawai?i. After eight months the strike disintegrated.

After the 1924 strike, the labor movement in Hawai?i dwindled, but did not die, and discontent among the workers rarely surfaced again. Pablo Manlapit, who had been imprisoned and exiled, returned to the islands in 1932 and started a new labor organization, this time hoping to include other ethnic groups. But the time was not ripe in the Depression years. There were small nuisance strikes in 1933 that made no headway and involved mostly Filipinos. Protests since the massacre have discouraged carrying guns at demonstrations.