The Davis Cup competition is set up in tennis. 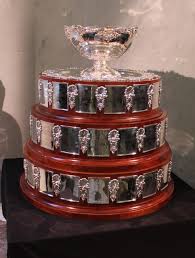 On February 9, 1900, the solid silver trophy known today as the Davis Cup is first put up for competition when American collegian Dwight Filley Davis challenges British tennis players to come across the Atlantic and compete against his Harvard team.

Davis, born in St. Louis, Missouri, won the intercollegiate tennis singles championship in 1899. In the summer of that year, he and his Harvard teammates traveled to the West Coast to play against some of California’s best players. Impressed by the enthusiasm with which spectators greeted the national competition, Davis decided to propose an international tennis event. He won the support of the U.S. National Lawn Tennis Association and personally spent $750 on the construction of an elegant silver trophy bowl, 13 inches high and 18 inches in diameter. In February 1900, Davis put the International Lawn Tennis Challenge Trophy up for competition.

Great Britain, regarded as the world’s leading tennis power, answered Davis’ challenge, and on August 8, 1900, three top British players came to the Longwood Cricket Club in Brookline, Massachusetts, to compete against Davis and his all-Harvard team.

Davis had devised a three-day format for the event that still exists today: two singles matches on the first and third days, and a doubles match on the second day. He was captain of the U.S. team and on August 8 received serve on the very first Davis Cup point, which he hit out. He ended up triumphing in the singles match, however, and the next day with Holcombe Ward defeated the British doubles team. Rain forced the cancellation of two of the singles matches, and the first Davis Cup ended with a 3-0 Harvard sweep.

Davis was famous for his powerful left-handed serve and concentrated on a risky net play strategy that won him brilliant victories and unexpected defeats. With Ward, he won the U.S. doubles title in 1900 and 1901, and he was ranked fourth nationally in 1902. That year, the British returned for a Davis Cup rematch in New York, and the star American doubles team succumbed to the ascendant Doherty brothers–Laurie and Reggie. The United States pulled ahead in singles, however, and kept the International Lawn Tennis Challenge Trophy with a 3-2 overall victory.

The next year, the Doherty brothers helped take the trophy back to England for the first time. In 1904, Belgium and France entered the Davis Cup competition, and soon after, Australia and New Zealand, whose players played collectively as Australasia. The trophy did not return to the U.S. until 1913 and then stayed only for a year before departing for Australasia.

After receiving a law degree, Dwight Davis returned to St. Louis and became involved in local politics. Beginning in 1911, he served as public parks commissioner and built the first municipal tennis courts in the United States. He fought in World War I and earned the Distinguished Service Cross for bravery. In 1920, he made an unsuccessful bid for the U.S. Senate but the next year traveled to Washington nonetheless as director of the War Finance Corporation. Beginning in 1923, he served as assistant secretary of war under President Calvin Coolidge and in 1925 was made secretary of war proper. In 1929, President Herbert Hoover appointed him governor-general of the Philippines, and he served in this post–which essentially made him the ruler of the Philippines–for the next four years.

Throughout his distinguished career as a statesman, Davis remained involved in tennis as both an avid recreational player and an administrator. In 1923, he served as president of the U.S. Lawn Tennis Association. When the International Lawn Tennis Challenge Trophy ran out of room for names, he donated a large silver tray to go with the bowl.

Today, the Davis Cup, as the International Lawn Tennis Challenge Trophy is commonly known, is the premier trophy of international team tennis. Each year, dozens of nations compete for the right to advance to the finals. Shortly before his death in 1945, David said of the growing prestige of the Davis Cup, “If I had known of its coming significance, it would have been cast in gold.”