This article is about the 1978 Black Friday pivotal event protest. For other events, see List of Black Fridays. For the video game, see 1979 Revolution: Black Friday.
Mass shooting of protesters in Pahlavi Iran on 8 September 1978

Black Friday (Persian: جمعه سیاه‎, romanized: Jom'e-ye Siyāh) is the name given to an incident occurring on 8 September 1978 (17 Shahrivar 1357 in the Iranian calendar) in Iran,[8] in which at least 100[9][10] people were shot dead and 205–8,000 injured by the Pahlavi military in Jaleh Square (Persian: میدان ژاله‎, romanized: Meydān-e Jāleh) in Tehran.[11][12] The deaths were described as the pivotal event in the Iranian Revolution that ended any "hope for compromise" between the protest movement and regime of Shah Mohammad Reza Pahlavi.[13] The incident is described by historian Ervand Abrahamian as "a sea of blood between the shah and the people."[2] 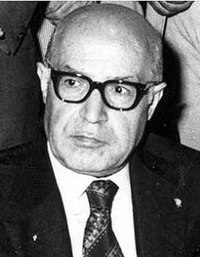 Sharif-Emami named his government as "Government of National reconciliation"

A crowd of the protesters had gathered in Jaleh square, Tehran, who were surrounded by the army. The gathering was shot at indiscriminately by the army leading to death of numerous people.[15]

Demonstration of Black Friday, the sentence on placard: "We want an Islamic government, led by Imam Khomeini".

Black Friday is thought to have marked the point of no return for the revolution, and it led to the abolition of Iran's monarchy less than a year later. It is also believed that Black Friday played a crucial role in further radicalizing the protest movement, uniting the opposition to the Shah and mobilized the masses. Initially, opposition and western journalists claimed that the Iranian army had massacred thousands of protesters.[1][16][17] The clerical leadership announced that "thousands have been massacred by Zionist troops".[18]

The events triggered protests that continued for another four months. The day after Black Friday, Amir-Abbas Hoveyda resigned as minister of court for unrelated reasons.

A general strike in October shut down the petroleum industry that was essential to the administration's survival, "sealing the Shah's fate".[19] The continuation of protests ultimately led to Shah leaving Iran in January 1979, clearing the way for the Iranian Revolution, led by Ayatollah Ruhollah Khomeini.[20][21][22][23][24][25][26]

Initially, Western media and opposition reported "15,000 dead and wounded", but Iranian government officials reported that 86 people had died in Tehran in the whole day.[7][page needed][27] French social theorist Michel Foucault first reported that 2,000 to 3,000 people had died in the Jaleh Square, and he later raised that number to 4,000.[1] The BBC's correspondent in Iran, Andrew Whitley, reported that hundreds had died.[28]

According to Emadeddin Baghi, a former researcher at the Martyrs Foundation (Bonyad Shahid, part of the current Iranian government, which compensates families of victims) hired "to make sense of the data" on those killed on Black Friday, 64 were killed in Jaleh Square on Black Friday, with two females: one woman and a young girl. On the same day in other parts of the capital, 24 people died in clashes with martial law forces, with one female, making the total casualties on the same day to 88 deaths.[1] Another source puts the Martyrs Foundation tabulation of dead at 84 during that day.[29]

The square's name was later changed to the Square of Martyrs (Maidan-e Shohada) by the Islamic republic.[17]

Since the 2000s, some former Pahlavi dynasty politicians have suggested greater ambiguity in the situation, in particular the presence of Palestinian guerrillas in Iran, who they believe were agitators.[30][31][page needed] 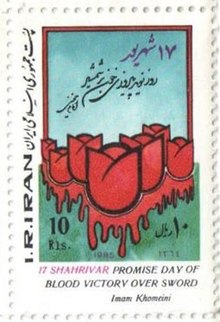 Nastaran Akhavan, one of the survivors, wrote the book Spared about the event. The book explains how the author was forced into a massive wave of thousands of angry protesters, who were later massacred by the Shah's military.[33] The 2016 adventure video game 1979 Revolution: Black Friday is based on the event. The game is directed by Navid Khonsari, who was a child at the time of the revolution and admitted he did not have a realistic view of what was taking place. Khonsari described creating the game as "[wanting] people to feel the passion and the elation of being in the revolution – of feeling that you could possibly make a change."[34]