Nader Shah, from the Afsharid dynasty, is crowned Shah of Iran. 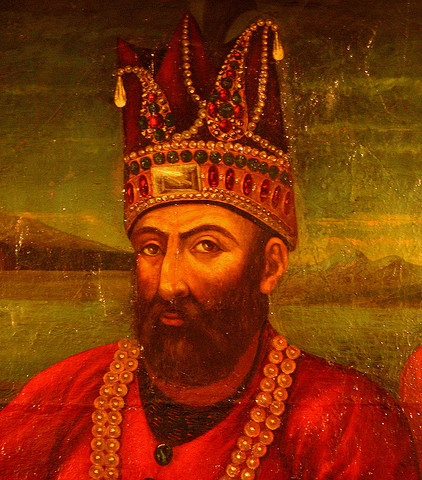 N?der Sh?h Afsh?r ruled as Shah of Iran and was the founder of the Afsharid dynasty. Because of his military genius, some historians have described him as the Napoleon of Persia[2] or the Second Alexander. Nader Shah was a member of the Turkmen Afshar tribe of northern Persia, which had supplied military power to the Safavid state since the time of Shah Ismail I.

Nader rose to power during a period of anarchy in Persia after a rebellion by Afghans had overthrown the weak Shah Soltan Hossein and both the Ottomans and the Russians had seized Persian territory for themselves. Nader reunited the Persian realm and removed the invaders. He became so powerful that he decided to depose the last members of the Safavid dynasty, which had ruled Persia for over 200 years, and become shah himself in 1736. His campaigns created a great Iranian Empire that briefly encompassed what is now Iran, Afghanistan, Pakistan, parts of the Caucasus region, and parts of Central Asia, but his military spending had a ruinous effect on the Persian economy.

Nader idolized Genghis Khan and Timur, the previous conquerors from Central Asia. Nader imitated their military prowess and—especially later in his reign—their cruelty. Nader Shah’s victories briefly made him the Middle East’s most powerful sovereign, but his empire quickly disintegrated after he was assassinated in 1747. Nader Shah has been described as “the last great Asian military conqueror.”