The Wall Street Journal is an American business-focused, English-language international daily newspaper based in New York City. The Journal, along with its Asian and European editions, is published six days a week by Dow Jones & Company, a division of News Corp. The newspaper is published in the broadsheet format and online.

The Wall Street Journal is the largest newspaper in the United States by circulation. According to the Alliance for Audited Media, the Journal had a circulation of about 2.4 million copies including nearly 900,000 digital subscriptions as of March 2013, compared with USA Today’s 1.7 million.

The newspaper has won 40 Pulitzer Prizes through 2017 and derives its name from Wall Street in the heart of the Financial District of Lower Manhattan. The Journal has been printed continuously since its inception on July 8, 1889, by Charles Dow, Edward Jones, and Charles Bergstresser.The Journal also publishes the luxury news and lifestyle magazine.

Here’s what is said to be the first issue of the Wall Street Journal, from July 8, 1889. 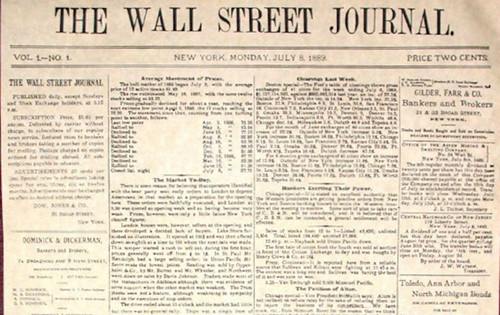 This certainly puts the chatter about “new media” versus “old media” in perspective. Imagine the clout sites (and companies) like Huffington Post and Gawker Media will look like when they’ve been around for 120 years.