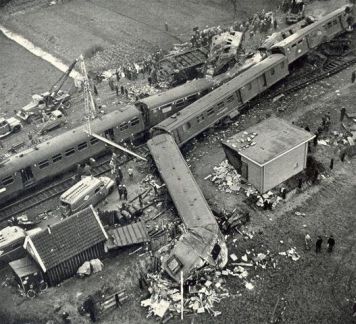 The Harmelen train disaster was the worst railway accident in the history of the Netherlands on 8 January 1962. Harmelen, in the central Netherlands, is the location of a railway junction where a branch to Amsterdam leaves the Rotterdam to Utrecht line. It is common at high-speed junctions to avoid the use of diamond crossings wherever possible — instead a ladder crossing is employed where trains destined for the branch line cross over to the track normally employed for trains travelling in the opposite direction for a short distance before taking the branch line.The accident spurred the installation on Dutch railways of the system of automatic train protection known as Automatische treinbeïnvloeding (ATB) which automatically overrides the driver in such a “signal passed at danger” situation. The junction itself was later rebuilt as a flying junction.The accident happened 1.5 year after the Woerden train accident, the derailment of a British furlough train nearby.