A German submarine U-20 sinks the RMS Lusitania, killing 1,198 people. 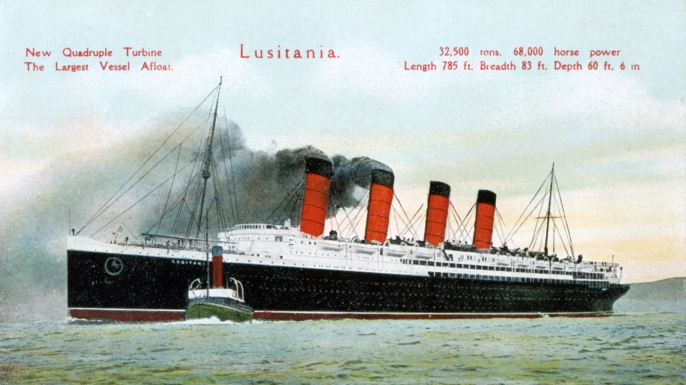 On May 7, 1915, a German U-boat operating off the coast of Ireland fired a torpedo into RMS Lusitania, causing the massive ocean liner to list precariously and then sink in just 18 minutes. The attack, part of Germany’s campaign of unrestricted submarine warfare, killed 1,198 passengers and crewmembers, including 128 Americans. Contrary to popular belief, this did not directly precipitate U.S. involvement in World War I. Yet it did serve as a widespread propaganda tool and rallying cry once American doughboys began shipping out overseas two years later.

Known as the “Greyhounds of the Seas,” Lusitania and its sister ship, Mauretania, were the fastest passenger liners of their age, capable of crossing the Atlantic Ocean in under five days. At more than 30,000 gross tons each, they were also the world’s largest liners from their launch in 1906 until being surpassed by Olympic and Titanic in 1910 and 1911, respectively. Said to be “more beautiful than Solomon’s Temple and big enough to hold all his wives,” Lusitania attracted a plethora of wealthy, prominent passengers. On its ill-fated final voyage, for example, those onboard included millionaire heir Alfred Vanderbilt, Broadway producer Charles Frohman and actress Rita Jolivet, as well as art collector Hugh Lane, who was purportedly traveling with Rembrandt and Monet paintings stashed away in sealed lead tubes. They were joined by a former British member of Parliament, an amateur boxing champion and a special envoy to the king and queen of Belgium, not to mention businessmen, nurses, would-be soldiers and children. What’s more, as secret documents and evidence gathered at the wreck site would later show, Lusitania had 4.2 million rounds of rifle ammunition, 1,250 cases of shrapnel shells and 18 cases of non-explosive fuses hidden away in its cargo hold, bound for the Western Front.