In violation of the Locarno Pact and the Treaty of Versailles, Germany reoccupies the Rhineland. 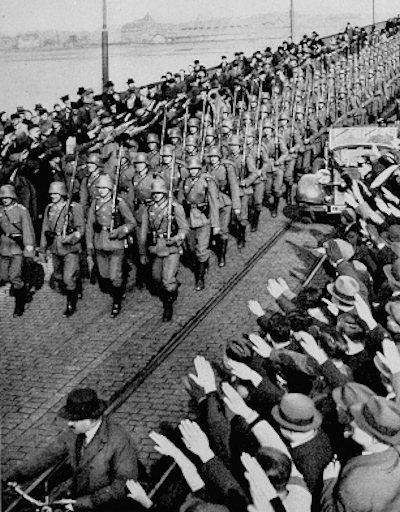 The remilitarization of the Rhineland by the German Army began on 7 March 1936 when German military forces entered the Rhineland. This was significant because it violated the terms of the Treaty of Versailles and the Locarno Treaties, marking the first time since the end of World War I that German troops had been in this region. The remilitarization changed the balance of power in Europe from France and its allies towards Germany, making it possible for Germany to pursue a policy of aggression in Western Europe that the demilitarized status of the Rhineland had blocked until then.

Under Articles 42, 43 and 44 of the 1919 Treaty of Versailles—imposed on Germany by the Allies after the Great War—Germany was “forbidden to maintain or construct any fortification either on the Left bank of the Rhine or on the Right bank to the west of a line drawn fifty kilometers to the East of the Rhine”. If a violation “in any manner whatsoever” of this Article took place, this “shall be regarded as committing a hostile act…and as calculated to disturb the peace of the world”. The Locarno Treaties, signed in October 1925 by Germany, France, Italy and Britain, stated that the Rhineland should continue its demilitarized status permanently. Locarno was regarded as important as it was a voluntary German acceptance of the Rhineland’s demilitarized status as opposed to the diktat of Versailles. Under the terms of Locarno, Britain and Italy guaranteed the Franco-German border and the continued demilitarized status of the Rhineland against a “flagrant violation” without however defining what constituted a “flagrant violation”. Under the terms of Locarno, if Germany should attempt to attack France, then Britain and Italy were obliged to go to France’s aid and likewise, if France should attack Germany, then Britain and Italy would be obliged to Germany’s aid. The American historian Gerhard Weinberg called the demilitarized status of the Rhineland the “single most important guarantee of peace in Europe” as it made it impossible for Germany to attack its neighbors in the West and as the demilitarized zone rendered Germany defenseless in the West, impossible to attack its neighbors in the East as it left Germany open to a devastating French offensive if the Reich tried to invade any of the states guaranteed by the French alliance system in Eastern Europe, the so-called Cordon sanitaire.

The Versailles Treaty also stipulated that Allied military forces would withdraw from the Rhineland by 1935. However, the German Foreign Minister Gustav Stresemann announced in 1929 that Germany would not ratify the 1928 Young Plan for continuing to pay reparations unless the Allies agreed to leave the Rhineland in 1930. The British delegation at the Hague Conference on German reparations in 1929 proposed that reparations paid by Germany be reduced and that British and French forces should evacuate the Rhineland. The last British soldiers left in late 1929 and the last French soldiers left in June 1930. As long as the French continued to occupy the Rhineland, the Rhineland functioned as a form of “collateral” under which the French could respond to any German attempt at overt rearmament by annexing the Rhineland. Once the last French soldiers left the Rhineland in June 1930, it could no longer play its “collateral” role, thus opening the door for German rearmament. The French decision to build the Maginot Line in 1929 was a tacit French admission that it was only a matter of time before German rearmament on a massive scale would begin sometime in the 1930s and that the Rhineland was going to be remilitarized sooner or later. Intelligence from the Deuxième Bureau indicated that Germany had been violating Versailles continuously all through the 1920s with the considerable help of the Soviet Union, and with the French troops out of the Rhineland, it could only be expected that Germany would become more open about violating Versailles. The Maginot Line in its turn lessened the importance of the Rhineland’s demilitarized status from a French security viewpoint.

The foreign policy of Fascist Italy was to maintain an “equidistant” stance from all the major powers in order to exercise “determinant weight”, which by whatever power Italy chose to align with would decisively change the balance of power in Europe, and the price of such an alignment would be support for Italian ambitions in Europe and/or Africa.

The foreign policy goal of the Soviet Union was set forth by Joseph Stalin in a speech on 19 January 1925 that if another world war broke out between the capitalist states that: “We will enter the fray at the end, throwing our critical weight onto the scale, a weight that should prove to be decisive”. To promote this goal which would lead to the global triumph of Communism, the Soviet Union tended to support German efforts to challenge the Versailles system by assisting German secret rearmament, a policy that caused much tension with France. An additional problem in Franco-Soviet relations was the Russian debt issue. Before 1917, the French had been by far the largest investors in Imperial Russia, and the largest buyers of Russian debt, so the decision by Lenin in 1918 to repudiate all debts and to confiscate all private property, whether it be owned by Russians or by foreigners, had hurt the world of French business and finance quite badly. The question of the Russian debt repudiation and compensation for French businesses affected by Soviet nationalisation policies poisoned Franco-Soviet relations until the early 1930s.

The centerpiece of interwar French diplomacy had been the cordon sanitaire in Eastern Europe, which was intended to keep both the Soviet Union and Germany out of Eastern Europe. To this end, France had signed treaties of alliance with Poland in 1921, Czechoslovakia in 1924, Romania in 1926 and Yugoslavia in 1927. The cordon sanitaire states were intended as a collective replacement for Imperial Russia as France’s chief eastern ally. The states of the cordon sanitaire emerged as an area of French political, military, economic and cultural influence.

As regards Germany, it had always been assumed by the states of the cordon sanitaire that if Germany should attack any of them, France would respond by beginning an offensive into western Germany. Long before 1933, German military and diplomatic elites had regarded the Rhineland’s demilitarized status as only temporary, and planned to remilitarize the Rhineland at the first favorable diplomatic opportunity. In December 1918, at a meeting of Germany’s leading generals, it had decided that the chief aim would be to rebuild German military power to launch a new world war to win the “world power status” that the Reich had sought, but failed to win in the last war. All through the 1920s and the early 1930s, the Reichswehr had been developing plans for a war to destroy France and its ally Poland, which necessarily presumed remilitarization of the Rhineland. Steps were taken by the German government to prepare for the remilitarization, such as keeping former barracks in a good state of repair, hiding military materials in secret depots, and building customs and fire watch towers that could be easily converted into observation and machine gun posts along the frontier.

From 1919 to 1932, British defense spending was based upon the Ten Year Rule, which assumed that there was to be no major war for the next ten years, a policy that led to the British military being cut to the bone. Amongst British decision-makers, the idea of the “continental commitment” of sending a large army to fight on the European mainland against Germany was never explicitly rejected, but was not favored. The memory of the heavy losses taken in the Great War had led many to see the “continental commitment” of 1914 as a serious mistake. For most of the inter-war period, the British were extremely reluctant to make security commitments in Eastern Europe, regarding the region as too unstable and likely to embroil Britain in unwanted wars. At most, Britain was willing to make only limited security commitments in Western Europe, and even then tried to avoid the “continental commitment” as much as possible. In 1925, the British Foreign Secretary, Sir Austen Chamberlain had famously stated in public at the Locarno conference that the Polish Corridor was “not worth the bones of a single British grenadier”. As such, Chamberlain declared that Britain would not guarantee the German-Polish border on the grounds that the Polish Corridor should be returned to Germany. That the British did not take even their Locarno commitments seriously could be seen in Whitehall’s prohibition of the British military chiefs’ holding staff talks with German, French and Italian militaries about what to do if a “flagrant violation” of Locarno occurred. In general, for most of the 1920s–30s, British foreign policy was based upon appeasement, under which the international system established by Versailles would be revised in Germany’s favor, within limits in order to win German acceptance of that international order, and thereby ensure the peace. One of the main British aims at Locarno was to create a situation where Germany could pursue territorial revisionism in Eastern Europe peacefully. The British viewpoint was that if Franco-German relations improved, France would gradually abandon the cordon sanitaire.

Once France had abandoned its allies in Eastern Europe as the price of better relations with the Reich, the Poles and Czechoslovaks would be forced to adjust to German demands, and would peacefully hand over the territories claimed by Germany such as the Sudetenland, the Polish Corridor and the Free City of Danzig. British policy-makers tended to exaggerate French power with the normally Francophile Sir Robert “Van” Vansittart, the Permanent Under-Secretary at the Foreign Office writing in 1931 that Britain was faced with an “unbearable” French domination of Europe, and what was needed was a revival of German power to counterbalance French power. French economic and demographic weaknesses in the face of Germany’s strengths such as the Reich’s far larger population and economy together with the fact that much of France had been devastated by World War I while Germany had escaped mostly undamaged were little appreciated in Whitehall.