The Lateran Treaty is ratified, establishing the Vatican City. 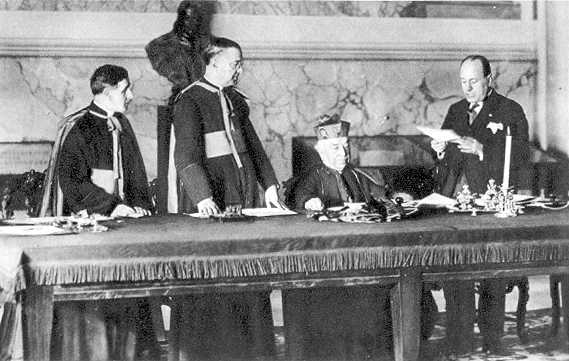 Lateran Treaty, also called Lateran Pact of 1929, treaty between Italy and the Vatican. It was signed by Benito Mussolini for the Italian government and by cardinal secretary of state Pietro Gasparri for the papacy and confirmed by the Italian constitution of 1948.

Upon ratification of the Lateran Treaty, the papacy recognized the state of Italy, with Rome as its capital. Italy in return recognized papal sovereignty over the Vatican City, a minute territory of 44 hectares (109 acres), and secured full independence for the pope. A number of additional measures were agreed upon. Article 1, for example, gave the city of Rome a special character as the “centre of the Catholic world and place of pilgrimage.” Article 20 stated that all bishops were to take an oath of loyalty to the state and had to be Italian subjects speaking the Italian language.

By article 34 the state recognized the validity of Catholic marriage and its subjection to the provisions of canon law; nullity cases were therefore reserved to the ecclesiastical courts, and there could be no divorce.The state agreed by article 36 of the concordat to permit religious instruction in the public primary and secondary schools and conceded to the bishops the right to appoint or dismiss those who imparted such instruction and to approve the textbooks that they used.

With the signing of the concordat of 1985, Roman Catholicism was no longer the state religion of Italy. This change in status brought about a number of alterations in Italian society. Perhaps the most significant of these was the end to compulsory religious education in public schools. The new concordat also affected such diverse areas as tax exemptions for religious institutions and ownership of the Jewish catacombs.