A hot air balloon crashes near Carterton, New Zealand. All 11 people on board are killed. 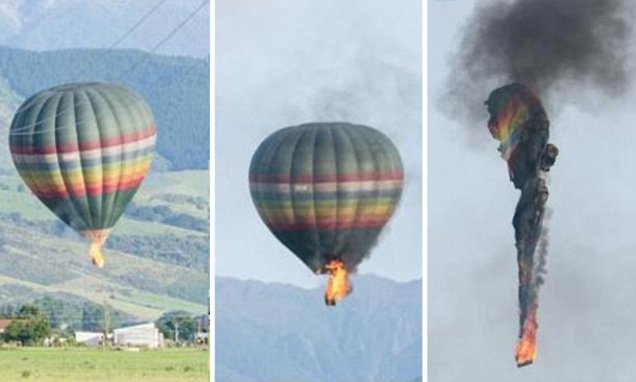 On 7 January 2012, a scenic hot air balloon flight from Carterton, New Zealand, collided with a high-voltage power line while attempting to land, causing it to catch fire, disintegrate and crash just north of the town, killing all eleven people on board.

An inquiry into the accident by the Transport Accident Investigation Commission concluded that the balloon pilot made an error of judgement when contact with the power lines became imminent, trying to out-climb the power lines rather than using the rapid descent system to drop the balloon quickly to the ground below. Toxicology analysis of the balloon pilot after the accident tested positive for tetrahydrocannabinol, suggesting he may have been under the influence of cannabis at the time of the crash, which ultimately led to the error in judgement. The crash was the sixth accident in ten years the TAIC had investigated which involved key people testing positive for drugs or alcohol, and the commission has called for the government to enact stricter measures in regards to drug and alcohol use in the aviation, marine and rail industries.

The balloon was a Cameron A-210 model, registered ZK-XXF and named Mr Big. The envelope was manufactured in the United Kingdom in 1997, and was initially used in the United Kingdom before being purchased and imported into New Zealand by Early Morning Balloons Ltd in 2001. The basket and burner system, capable of carrying ten passengers plus pilot, were manufactured in 1989 and were previously used with a Thunder and Colt 160A envelope before the envelope was retired at the end of its useful life.

The balloon took off at 6:38 am from its launching area in Carterton, a town of 4100 people in north-eastern Wellington Region, on a 45-minute scenic flight over the Carterton area, carrying ten passengers. The Masterton-based pilot was one of New Zealand’s most experienced balloon pilots, with more than 10,000 hours flying time, and was the safety officer for the “Balloons over Wairarapa” hot air balloon festival, held annually in March around the Carterton and Masterton area. The ten passengers were all from the greater Wellington Region: two husband-and-wife couples from Masterton and Wellington, a couple from Lower Hutt, a boyfriend and girlfriend from Wellington, and two cousins from Masterton and Paraparaumu. At the time, the weather was clear, with sufficient light and little wind. Data collected from weather stations at six nearby vineyards confirmed that the wind was mostly calm with occasional gusts up to 11.4 kilometres per hour from the north-east.

The accident occurred around 7:20 am, when the balloon was attempting to land after completing a partial figure-8 flight pattern over the Carterton area. The pilot had indicated to the chase team he was likely to land near Somerset Road, a rural through road just north of Carterton in the locality of Clareville. At first the balloon was heading north-east over Somerset Road, around 700 metres east of the road’s intersection with State Highway 2. Around 400 metres north of Somerset Road, the balloon reversed direction and headed back towards the road. The two chase vehicles, carrying some of the family members of the passengers, positioned on the road ready to assist with the landing.

Eyewitnesses saw the balloon climb and drift east towards a ten-metre high 33,000-volt power line running perpendicular to the road, one of the two lines that connected the Clareville zone substation, which supplied Carterton and the surrounding rural area, to the national grid at Transpower’s Masterton substation. The pilot was heard shouting “duck down” as the balloon came in contact with the power line around 85 metres from the road. One of the conductor wires was caught over the top of the pilot’s end of the basket, and the pilot attempted to get the balloon to climb, but the tension of the wire prevented it rising and instead the balloon slid along the conductor. Around 20 seconds later, electrical arcing occurred as the balloon caused a phase-to-phase short circuit, tripping the line and causing the 3800 properties supplied by the Clareville zone substation to lose power. The arcing caused one of the four liquefied petroleum gas bottles supplying the burners to rupture, and a fire subsequently started.

Two of the passengers jumped from the balloon to avoid the fire, falling ten metres to their deaths below. As the fire intensified, it caused the air inside the balloon to heat and force it to rise. Eventually, the conductor wire on the power line snapped, sending the balloon shooting upwards. The fire soon engulfed the whole balloon, and 150 metres in the air, the envelope disintegrated, causing the balloon to fall towards the ground, with the wreckage landing in a field just south of Somerset Road, around 600 metres east of the SH2 intersection.

Emergency services were on the scene within seven minutes but, shortly after they arrived, ambulance staff found that all eleven people had died at the scene, and this was later confirmed by police. The bodies of the two people who jumped from the balloon were located 200 metres from the crash site.

It took two days until 9 January to remove the last victims’ bodies from the crash site. All eleven victims’ bodies were taken to Wellington Hospital to be formally identified.

The wreckage was examined at the scene, before being packed into a shipping container and transported to the TAIC’s secure workshop in Wellington.

Power to the Carterton area was restored shortly after the crash using the remaining subtransmission line and spare capacity in the 11,000-volt distribution network until the damaged line was repaired. The damaged power line conductors were removed from the scene for examination.

A memorial was erected in January 2016 near the site of the disaster.