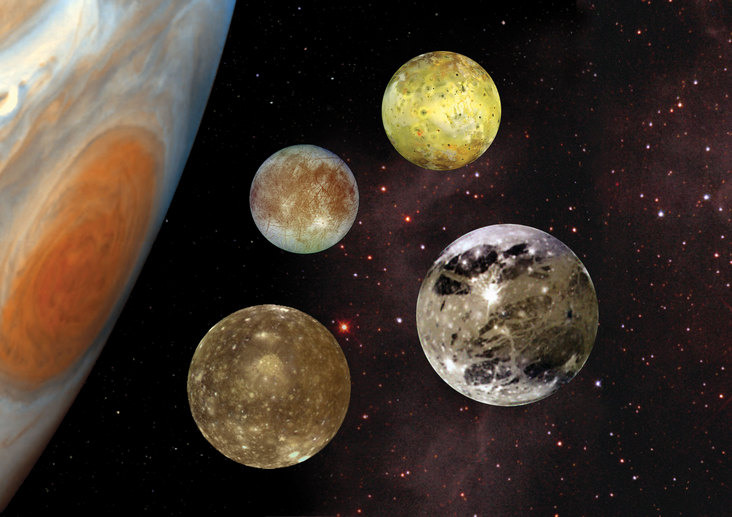 Probably the most significent contribution that Galileo Galilei made to science was the discovery of the four satellites around Jupiter that are now named in his honor. Galileo first observed the moons of Jupiter on January 7, 1610 through a homemade telescope. He originally thought he saw three stars near Jupiter, strung out in a line through the planet. The next evening, these stars seemed to have moved the wrong way, which caught his attention. Galileo continued to observe the stars and Jupiter for the next week. On January 11, a fourth star (which would later turn out to be Ganymede) appeared. After a week, Galileo had observed that the four stars never left the vicinity of Jupiter and appeared to be carried along with the planet, and that they changed their position with respect to each other and Jupiter. Finally, Galileo determined that what he was observing were not stars, but planetary bodies that were in orbit around Jupiter. This discovery provided evidence in support of the Copernican system and showed that everything did not revolve around the Earth.

Galileo originally called the Jupiter’s moons the “Medicean planets”, after the Medici family and referred to the individual moons numerically as I, II, III and IV. Galileo’s naming system would be used for a couple of centuries. It wouldn’t be until the mid-1800’s that the names of the Galilean moons: Io, Europa, Ganymede and Callisto, would be officially adopted, and only after it became very apparent that naming moons by number would be very confusing as new additional moons were being discovered.