The Galileo spacecraft arrives at Jupiter six years after it was launched. 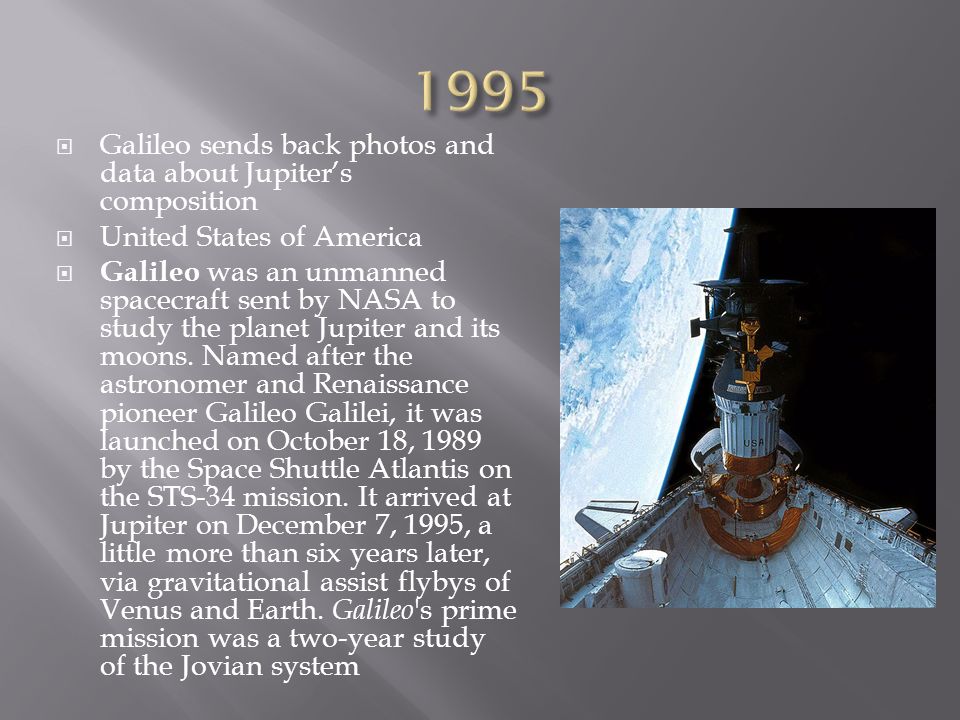 Galileo was an American unmanned spacecraft that studied the planet Jupiter and its moons, as well as several other Solar System bodies. Named after the astronomer Galileo Galilei, it consisted of an orbiter and entry probe. It was launched on October 18, 1989, carried by Space Shuttle Atlantis, on the STS-34 mission. Galileo arrived at Jupiter on December 7, 1995, after gravitational assist flybys of Venus and Earth, and became the first spacecraft to orbit Jupiter. It launched the first probe into Jupiter, directly measuring its atmosphere. Despite suffering major antenna problems, Galileo achieved the first asteroid flyby, of 951 Gaspra, and discovered the first asteroid moon, Dactyl, around 243 Ida. In 1994, Galileo observed Comet Shoemaker–Levy 9’s collision with Jupiter.

Jupiter’s atmospheric composition and ammonia clouds were recorded, the clouds possibly created by outflows from the lower depths of the atmosphere. Io’s volcanism and plasma interactions with Jupiter’s atmosphere were also recorded. The data Galileo collected supported the theory of a liquid ocean under the icy surface of Europa, and there were indications of similar liquid-saltwater layers under the surfaces of Ganymede and Callisto. Ganymede was shown to possess a magnetic field and the spacecraft found new evidence for exospheres around Europa, Ganymede, and Callisto. Galileo also discovered that Jupiter’s faint ring system consists of dust from impacts on the four small inner moons. The extent and structure of Jupiter’s magnetosphere was also mapped.

On September 21, 2003, after 14 years in space and 8 years in the Jovian system, Galileo’s mission was terminated by sending it into Jupiter’s atmosphere at a speed of over 48 kilometers per second, eliminating the possibility of contaminating local moons with terrestrial bacteria.