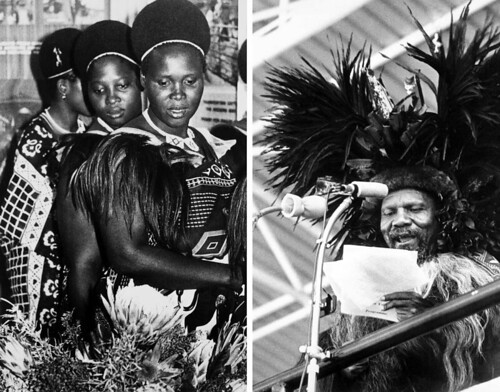 Swaziland became independent on 6 September 1968 and joined the Commonwealth. In 1973, the King repealed the independence constitution, abolishing parliament and all political parties. The tinkhundla system of government was introduced in 1978 and overhauled in 1993 (see Constitution). When the King died in 1982, there was a four-year delay before Prince Makhosetive acceded to the throne as King Mswati III in 1986. From the mid-1980s there was building pressure for a return to multiparty democracy. The reintroduction of universal adult suffrage in 1993 only served to increase this pressure. There was from the mid-1990s a succession of strikes organised by the Swaziland Federation of Trade Unions and increasingly public activity by opposition movements. A Constitutional Review Commission was set up in July 1996 to solicit the views of the Swazi nation on the type of constitution the people wanted, by visiting all the constituencies in the country and then submitting a report, including a draft new constitution by 1998.

Elections for pre-selected candidates were held in October 1998. About 60% of the registered voters cast their vote. The King confirmed Dr Sibusiso Barnabas Dlamini as prime minister. Most of the 16 ministers were royal appointees rather than elected members of parliament.

The Constitutional Review Commission finally presented its report to the King in November 2000, but it was not published. In 2001 the King attempted to give himself additional powers to contain the pressure for constitutional reform but climbed down in the face of national and international protests. In August 2001 he called a national gathering and the Commission’s chairperson announced – to an audience of only about 10,000 people (the last national gathering was attended by 250,000) – that the King’s powers were to be enlarged but gave no details of the fruits of the five-year review.

Subsequently the King set up a new commission to draft a new constitution and the draft was released in May 2003. However, under this constitution the country was to remain an absolute monarchy and, though freedom of assembly was to be allowed and the ban on political parties therefore technically lifted, under the continuing tinkhundla election system there is no role for parties.

Share on Facebook Share
Share on TwitterTweet
Share on LinkedIn Share
Famous Words of Inspiration...
"To us, the moment 8:17 A.M. means something - something very important, if it happens to be the starting time of our daily train. To our ancestors, such an odd eccentric instant was without significance - did not even exist. In inventing the locomotive, Watt and Stevenson were part inventors of time."
Aldous Huxley
— Click here for more from Aldous Huxley