Dwight Eisenhower is reelected as a President of the United States. 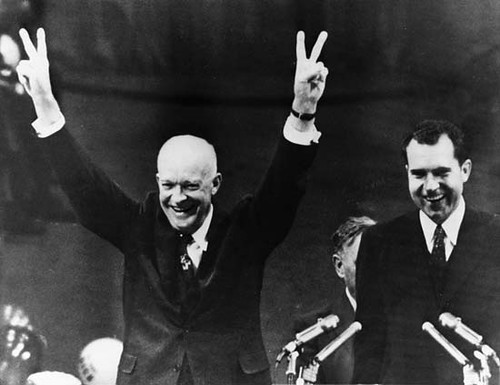 The United States presidential election of 1956 was the 43rd quadrennial presidential election, held on Tuesday, November 6, 1956. The popular incumbent President, Republican Dwight D. Eisenhower, successfully ran for re-election. The election was a re-match of 1952, as Eisenhower’s opponent in 1956 was Adlai Stevenson, a former Illinois governor, whom Eisenhower had defeated four years earlier.

Eisenhower was popular, although his health had become a concern.Stevenson remained popular with a core of liberal Democrats, but held no office and had no real base. As the country enjoyed peace – Eisenhower had ended the Korean War – and economic growth, few doubted a successful re-election for the charismatic Eisenhower. However the weeks before the election saw two major international crises in the Middle East and Eastern Europe. Eisenhower’s Republican base had grown thanks to the growth of suburbs. He maintained his 1952 gains among Democrats, especially white urban Southerners and Northern Catholics. His voters were less likely to bring up his leadership record. Instead what stood out this time, “was the response to personal qualities— to his sincerity, his integrity and sense of duty, his virtue as a family man, his religious devotion, and his sheer likeableness.”

Compared to the 1952 election, Eisenhower gained Kentucky, Louisiana, and West Virginia from Stevenson, while losing Missouri.