Richard III is crowned the King of England. 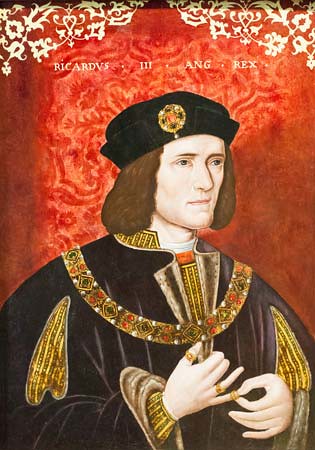 Richard III, also called Richard Plantagenet, duke of Gloucester, born October 2, 1452, Fotheringhay Castle, Northamptonshire, England—died August 22, 1485, near Market Bosworth, Leicestershire, the last Plantagenet and Yorkist king of England. He usurped the throne of his nephew Edward V in 1483 and perished in defeat to Henry Tudor at the Battle of Bosworth Field. For almost 500 years after his death, he was generally depicted as the worst and most wicked of kings. Some of those charges are now regarded as excessive, the work of his enemies, and his supporters have attempted to rehabilitate him. Modern scholars take a more-balanced approach that avoids the extremes of either side.

Richard III presented himself as a reformer committed to justice and morality who would remedy the supposed misrule of Edward IV’s last years and the sexual license of his brother’s court. His signet registers reveal plans to improve the management of the royal estates and the north. He also came to an agreement with Queen Elizabeth and the Wydevilles. She accepted him as king, and he allowed her and her daughters to emerge from sanctuary and provided for them. Unfortunately, his good intentions could not be implemented in a reign of only two years or in the face of serious opposition.