The Vatican is bombed during World War II. 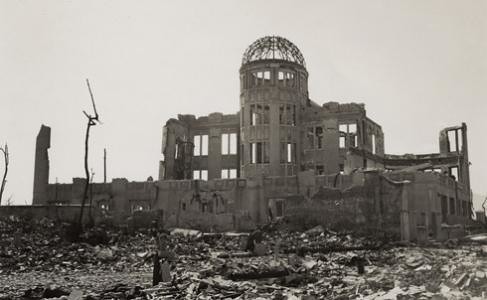 On 5 November a single plane flew over Vatican City and dropped bombs. The identity of the plane was never established despite a series of investigations launched by the Secretary of State, Cardinal Maglione and responses made by the British, American and German governments. Amidst the documents is a telegram sent by Maglione to the Apostolic Delegate in Washington, Amleto Cicognani, that there was a rumour that Stalin had congratulated Churchill for ordering the raid! The British government promptly denied the rumour.

The three governments denied responsibility and reaffirmed their committment to observing Vatican neutrality. The Allies accused the Germans, who counter-accused the Allies of bombing the Vatican for propaganda purposes. On 9 December the British and American governments informed the Vatican that Allied pilots had been ordered to avoid flying over Vatican territory.

The timing of the bombing was significant. Rome was occupied by the Germans, the Jews of Rome were either in Auschwitz or hiding, the city was hungry with the very real spectre of famine hovering ominiously, the partisans were stepping up anti-German activity and Naples had been liberated a few weeks but not before the Germans wrecked a savagery on the city not witnessed outside of Eastern Europe. The Vatican remained visibily neutral hoping Rome would be spared.

The Zenit article proposes a new theory based on new documents that suggest the source of the raid lay in orders given by Roberto Farinacci from the Salo Republic in an attempt to silence Vatican Radio. According to the new information, Farinacci was convinced the Vatican was sending information to the Allied. It will be interesting to read the book which has received some coverage in the Italian press.