The Teton Dam in the Fremont and Madison counties in Idaho, United States, collapses. 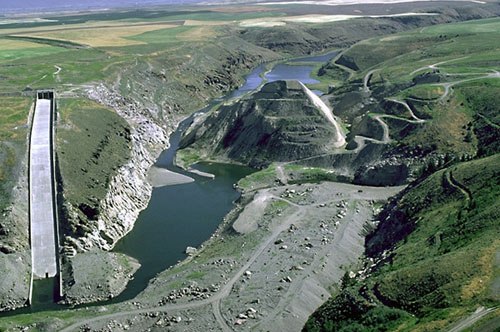 Teton Dam, a 305-foot high earthfill dam across the Teton River in Madison County, southeast Idaho, failed completely and released the contents of its reservoir at 11:57 AM on June 5, 1976. Failure was initiated by a large leak near the right (northwest) abutment of the dam, about 130 feet below the crest. The dam, designed by the U.S. Bureau of Reclamation, failed just as it was being completed and filled for the first time.

Between 9:30 and 10 AM, a wet spot developed on the downstream face of the dam, 15 to 20 feet out from the right abutment at about the same elevation as the seepage coming from the right abutment rock. This wet spot developed rapidly into seepage, and material soon began to slough, and erosion proceeded back into the dam embankment. The water quantity increased continually as the hole grew. Efforts to fill the increasing hole in the embankment were futile during the following 2 to 2 1/2 hour period until failure. The sheriff of Fremont County (St. Anthony, Idaho) said that his office was officially warned of the pending collapse of the dam at 10:43 AM on June 5. The sheriff of Madison County, Rexburg, Idaho, was not notified until 10:50 AM on June 5. He said that he did not immediately accept the warning as valid but concluded that while the matter was not too serious, he should begin telephoning people he knew who lived in the potential flood path.

The dam breached at 11:57 AM when the crest of the embankment fell into the enlarging hole and a wall of water surged through the opening. By 8 PM the flow of water through the breach had nearly stabilized. Downstream the channel was filled at least to a depth of 30 feet for a long distance. About 40 percent of the dam embankment was lost, and the powerhouse and warehouse structure were submerged completely in debris.

Share on Facebook Share
Share on TwitterTweet
Share on LinkedIn Share
Famous Words of Inspiration...
"Surely there is something in the unruffled calm of nature that overawes our little anxieties and doubts; the sight of the deep-blue sky and the clustering stars above seems to impart a quiet to the mind."
Jonathan Edwards
— Click here for more from Jonathan Edwards