Venezuela declares independence from Spain and on 5 July 1884, Germany takes possession of Cameroon. 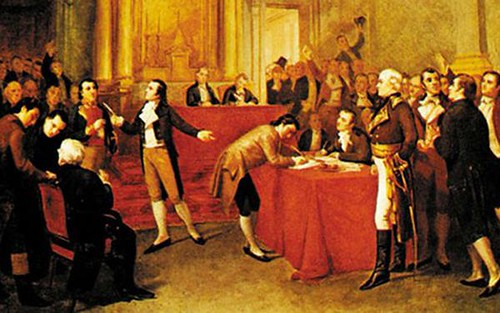 The Venezuelan Declaration of Independence is a statement adopted by a congress of Venezuelan provinces on July 5, 1811, through which Venezuelans made the decision to separate from the Spanish Crown in order to establish a new nation based on the premises of equality of individuals, abolition of censorship and dedication to freedom of expression. These principles were enshrined as a constitutional principal for the new nation and were radically opposed to the political, cultural, and social practices that had existed during three hundred years of colonization.

Seven of the ten provinces belonging to the Captaincy General of Venezuela declared their independence and explained their reasons for this action, among them, that it was baneful that a small European nation ruled the great expanses of the New World, that Spanish America recovered its right to self-government after the abdications of Charles IV and Ferdinand VII at Bayonne, and that the political instability in Spain dictated that Venezuelans rule themselves, despite the brotherhood they shared with Spaniards. The seven provinces were Caracas Province, Cumaná Province, Barinas Province, Margarita Province, Barcelona Province, Mérida Province and Trujillo Province.

The declaration proclaimed a new nation called the American Confederacy of Venezuela and was mainly written by Cristóbal Mendoza and Juan Germán Roscio. It was ratified by Congress on July 7, 1811, and recorded in the Congress’s Book of Minutes on August 17, 1811, in Caracas.

Share on Facebook Share
Share on TwitterTweet
Share on Google Plus Share
Share on LinkedIn Share
Famous Words of Inspiration...
"We seem to be going through a period of nostalgia, and everyone seems to think yesterday was better than today. I don't think it was, and I would advise you not to wait ten years before admitting today was great. If you're hung up on nostalgia, pretend today is yesterday and just go out and have one hell of a time."
Art Buchwald
— Click here for more from Art Buchwald