Titus Labienus is defeated by Julius Caesar in the Battle of Ruspina. 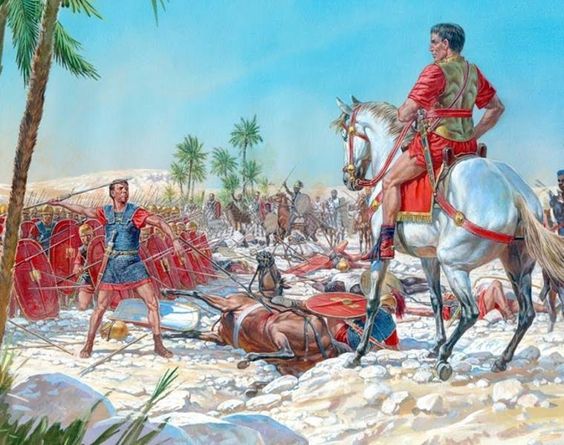 The Battle of Ruspina was fought on January 4, 46 BC in the Roman province of Africa, between the Republican forces of the Optimates and forces loyal to Julius Caesar. The Republican army was commanded by Titus Labienus, Caesar’s former supporter who had defected to the Republican side at the beginning of the civil war. It was one of the last politico-military conflicts in the Roman Republic before the establishment of the Roman Empire. It began as a series of political and military confrontations, between Julius Caesar, his political supporters, and his legions, against the Optimates, the politically conservative and socially traditionalist faction of the Roman Senate, who were supported by Pompey and his legions.

After a five-year-long politico-military struggle, fought in Italy, Illyria, Greece, Egypt, Africa, and Hispania, Caesar defeated the last of the Optimates in the Battle of Munda and became Dictator perpetuo of Rome. The changes to Roman government concomitant to the war mostly eliminated the political traditions of the Roman Republic and led to the Roman Empire.

Share on Facebook Share
Share on TwitterTweet
Share on Google Plus Share
Share on LinkedIn Share
Famous Words of Inspiration...
"We have no government armed with power capable of contending with human passions unbridled by morality and religion. Avarice, ambition, revenge, or gallantry, would break the strongest cords of our Constitution as a whale goes through a net. Our Constitution was made only for a moral and religious people. It is wholly inadequate to the government of any other."
John Adams
— Click here for more from John Adams