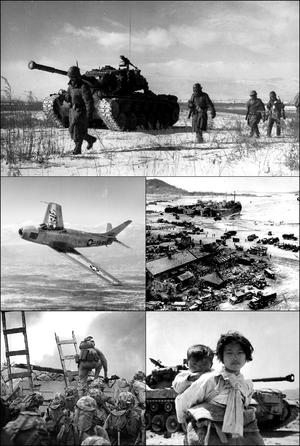 With Lieutenant-General Matthew Ridgway assuming the command of the U.S. Eighth Army on 26 December, the PVA and the KPA launched their Third Phase Offensive on New Year’s Eve of 1950. Utilizing night attacks in which UN Command fighting positions were encircled and then assaulted by numerically superior troops who had the element of surprise, the attacks were accompanied by loud trumpets and gongs, which fulfilled the double purpose of facilitating tactical communication and mentally disorienting the enemy. UN forces initially had no familiarity with this tactic, and as a result some soldiers panicked, abandoning their weapons and retreating to the south. The Chinese New Year’s Offensive overwhelmed UN forces, allowing the PVA and KPA to conquer Seoul for the second time on 4 January 1951.

B-26 Invaders bomb logistics depots in Wonsan, North Korea, 1951
These setbacks prompted General MacArthur to consider using nuclear weapons against the Chinese or North Korean interiors, with the intention that radioactive fallout zones would interrupt the Chinese supply chains. However, upon the arrival of the charismatic General Ridgway, the esprit de corps of the bloodied Eighth Army immediately began to revive.

UN forces retreated to Suwon in the west, Wonju in the center, and the territory north of Samcheok in the east, where the battlefront stabilized and held. The PVA had outrun its logistics capability and thus were unable to press on beyond Seoul as food, ammunition, and matériel were carried nightly, on foot and bicycle, from the border at the Yalu River to the three battle lines. In late January, upon finding that the PVA had abandoned their battle lines, General Ridgway ordered a reconnaissance-in-force, which became Operation Roundup. A full-scale X Corps advance proceeded, which fully exploited the UN Command’s air superiority, concluding with the UN reaching the Han River and recapturing Wonju.

Following the failure of ceasefire negotiations in January, the United Nations General Assembly passed Resolution 498 on 1 February, condemning PRC as an aggressor, and called upon its forces to withdraw from Korea.

In early February, the South Korean 11th Division ran the operation to destroy the guerrillas and their sympathizer citizens in Southern Korea. During the operation, the division and police conducted the Geochang massacre and Sancheong-Hamyang massacre. In mid-February, the PVA counterattacked with the Fourth Phase Offensive and achieved initial victory at Hoengseong. But the offensive was soon blunted by the IX Corps positions at Chipyong-ni in the center. The U.S. 2nd Infantry “Warrior” Division’s 23rd Regimental Combat Team and the French Battalion fought a short but desperate battle that broke the attack’s momentum. The battle is sometimes known as the “Gettysburg of the Korean War”. 5,600 South Korean, U.S., and French troops were surrounded on all sides by 25,000 Chinese. United Nations forces had previously retreated in the face of large Communist forces instead of getting cut off, but this time they stood and fought, and won.