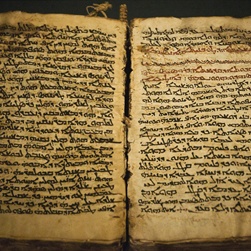 The Codex Sinaiticus is discovered in Egypt.

On this day in 1859, the Codex Sinaiticus was discovered in Egypt, in the Monastery of Saint Catherine, by the Leipzig archaeologist Constantin von Tischendorf. The Codex Sinaiticus is an ancient handwritten copy of the Greek Bible, and alongside the Codex Vaticanus, it is the finest Greek text of the New Testament. Also including much of the Old Testament, it is an inestimably important document in the history of Christianity. The Codex was written sometime in the 4th century (between 325 and 360 AD), and is an Alexandrian text-type manuscript. The exact circumstances in which it ended up in an Egyptian monastery are still unknown; some think it may actually have been written in Egypt, while others say it was more likely written in Rome.

Constantin von Tischendorf paid his first visit to the Monastery of Saint Catherine in 1844, and discovered some parchments from an important ancient document, the Septuagint, casually discarded in a wastepaper basket. The German archaeologist was allowed to bring them back to his homeland, and deposited them in the Leipzig University Library. He returned for a second time in 1853, and then a third time in 1859—on this occasion under the patronage of the Russian Tsar Alexander II, who was extremely eager to recover any other lost manuscripts from the distant Sinai monastery. Indeed, von Tischendorf went on to discover one of the most important religious documents in existence, on 4 February.