Over 10 000 are killed in an earthquake in Naples, Italy. 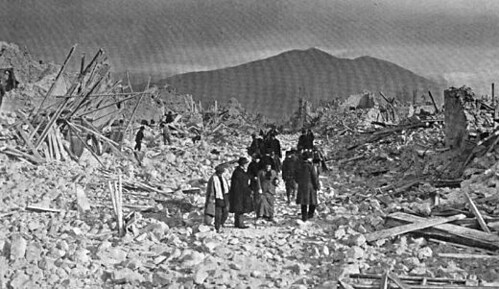 The region around Naples, one of the most physically unstable areas of high population in the world with a long history of volcanic activity and earthquakes, suffered one of its more devastating events on this day in 1626. An earthquake that it has been estimated would register around seven on the modern Richter scale struck the city and the surrounding area.

Its epicentre was about 50km out to sea, beyond the Bay of Naples and the island of Capri to the south, but the shock waves were strong enough to cause the collapse of many buildings in the city and the destruction of more than 30 small towns and villages.A tsunami followed, in which according to some reports the sea receded by more than three kilometres before rushing back with enormous force, towering waves engulfing the coastline.

In total, it is thought that approximately 70,000 people were killed by the quake itself and the tsunami. Naples at the time was a thriving city, still under Spanish rule. It had a population of around 300,000, which made it the largest port city in Europe and the second largest of all European cities apart from Paris, which had about half a million inhabitants.

Indeed, the 1626 quake came during one of several periods punctuated by deadly events. There had been three earthquakes in one year in 1622, sparking a wave of activity that was perhaps behind the substantial eruption of Vesuvius that took place in 1631. It was the first of any consequence for four centuries, resulting in the deaths of between 3,000 and 6,000 people. Nowadays some three million people live in and around Naples and although the last few decades have been calm, seismologists say there is little reason to be complacent.