Taipei 101, the tallest skyscraper at that time in the world is officially opened. 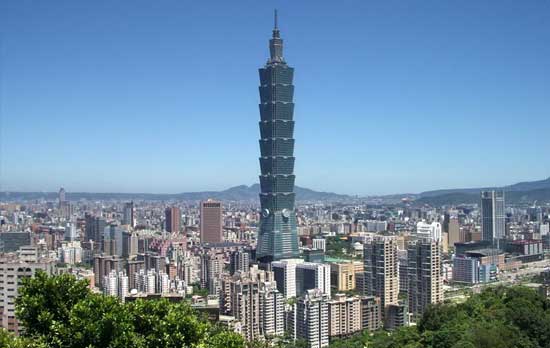 Taipei 101, the world’s tallest building, will be officially inaugurated in Taipei, Taiwan, on Dec. 31. The 1,666-foot skyscraper tops the previous record holder, the Petronas Towers in Kuala Lumpur, by 183 feet.

Designing the 101-story building in the earthquake- and typhoon-prone region presented quite a challenge. Engineers had to account for the fact that the tower stands about 650 feet from a major fault line, and that it will face winds of 100 mph.

Still, Taipei 101 won’t hold the title of world’s tallest skyscraper for long. Buildings in Shanghai and Dubai are expected to surpass it, as will the Freedom Tower in New York — on the World Trade Center site — which is scheduled for completion in 2009.

Taiwanese skyscraper, a 101-story tower in Xinyi District, Taipei. The building was officially classified as the world’s tallest in 2004, and remained such until the completion of Burj Khalifa in Dubai in 2009. In 2011, the building was awarded the LEED platinum certification, the highest award according to the Leadership in Energy and Environmental Design (LEED) rating system, and became the tallest and largest green building in the world.

Construction started in 1999 and finished in 2004. The tower has served as an icon of modern Taiwan ever since its opening. The building was architecturally created as a symbol of the evolution of technology and Asian tradition. Its postmodernist approach to style incorporates traditional design elements and gives them modern treatments. The tower is designed to withstand typhoons and earthquakes. A multi-level shopping mall adjoining the tower houses hundreds of stores, restaurants and clubs. Fireworks launched from Taipei 101 feature prominently in international New Year’s Eve broadcasts and the structure appears frequently in travel literature and international media.

Taipei 101 is primarily owned by pan-government share holders. The name originally planned for the building, Taipei World Financial Center, until 2003, was derived from the name of the owner. The original name in Chinese was literally Taipei International Financial Center.