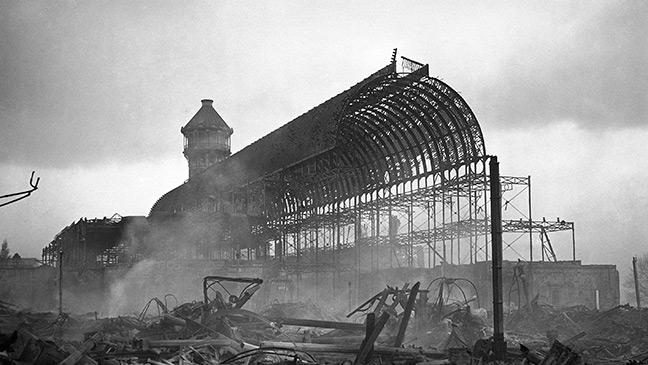 The Crystal Palace in London is destroyed by fire.

On November 30, 1936, the Crystal Palace, an iconic structure which had come to epitomise the pomp of the Victorian era, was destroyed by one of the greatest fires ever seen in London. The 990,000 square foot cast iron and plate glass building was constructed in Hyde Park for the Great Exhibition in 1851, at the behest of the Queen’s husband Prince Albert. In 1854 it was redesigned and reconstructed on Penge Common, by Sydenham Hill in South East London.

The blaze took hold with alarming speed as the flames, helped by a strong wind, swept across the Palace’s acres of timber flooring, up into galleries and along glazing bars. The Penge Fire Brigade was not called until nearly 8pm; by that time, the building was an inferno. Despite the best efforts of 88 fire appliances and 438 men from four brigades, the building could not be saved, its central transept collapsing with a deafening roar. Buckland told reporters that the magnificent structure would “live in the memories not only of Englishmen, but the whole world”.

Share on Facebook Share
Share on TwitterTweet
Share on LinkedIn Share
Famous Words of Inspiration...
"Poetry may make us from time to time a little more aware of the deeper, unnamed feelings which form the substratum of our being, to which we rarely penetrate; for our lives are mostly a constant evasion of ourselves."
T.S. Eliot
— Click here for more from T.S. Eliot