Hong Kong is liberated from it control by Japan by the British Armed Forces. 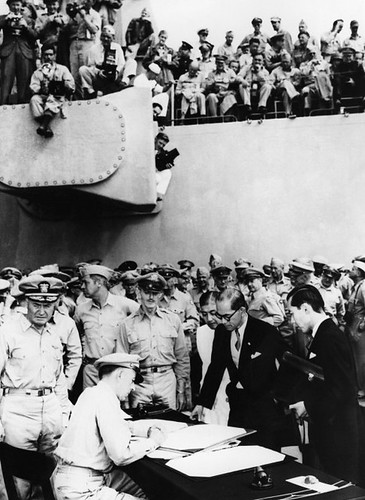 The second world war, which some predicted might continue for another two years in Asia, came to an abrupt halt on August 15, 1945, when Emperor Hirohito solemnly announced the unconditional surrender of Japan, six days after the second atomic bomb had been dropped on Nagasaki.

It was a profound moment, but a conflict of such magnitude could not be neatly wrapped up overnight. In many remote parts of Asia, the surrender, formally signed on USS Missouri, in Tokyo Bay, Japan, on September 2, took months to fully implement. In Hong Kong and mainland China, the reality was more complicated than just flag-waving crowds greeting liberating troops.

There was a curious, though relatively orderly, hiatus of more than two weeks in Hong Kong between the emperor’s announcement and the day Rear Admiral Cecil Harcourt’s British naval force steamed into Victoria Harbour, 70 years ago today. During that period, civilians, ex-prisoners of war and defeated Japanese military personnel could do little but sit and wait to find out what the future held.

Diaries and memoirs of individuals from that uncertain dawn of peace reveal personal and private dimensions to the cessation of hostilities. After the initial joy, many accounts are tinged with confusion, anxiety and heartbreak.