The last of the great auks are killed. 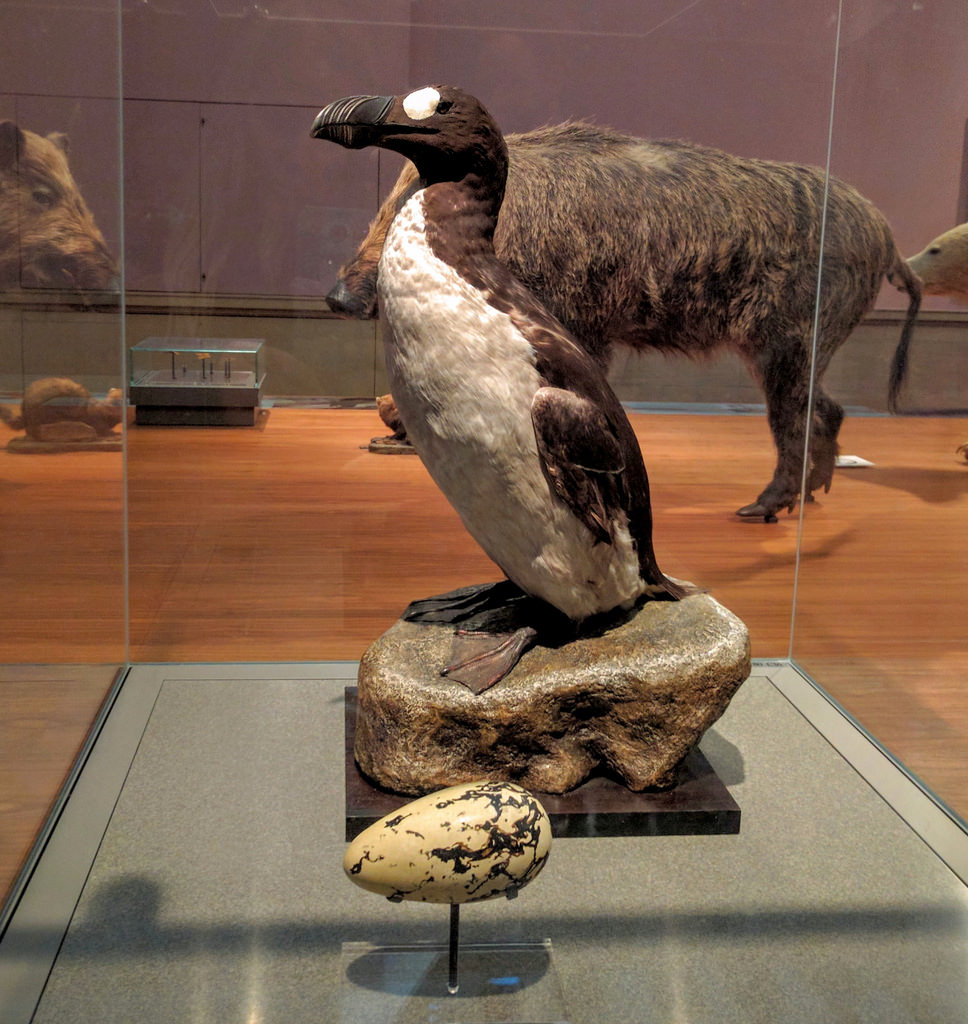 The great auk is a species of flightless alcid that became extinct in the mid-19th century. It was the only modern species in the genus Pinguinus. It is unrelated to the birds now known as penguins, which were discovered later and so named by sailors because of their physical resemblance to the great auk.

It bred on rocky, isolated islands with easy access to the ocean and a plentiful food supply, a rarity in nature that provided only a few breeding sites for the great auks. When not breeding, they spent their time foraging in the waters of the North Atlantic, ranging as far south as northern Spain and along the coastlines of Canada, Greenland, Iceland, the Faroe Islands, Norway, Ireland, and Great Britain.

The great auk was 75 to 85 cm tall and weighed about 5 kg, making it the second-largest member of the alcid family. It had a black back and a white belly. The black beak was heavy and hooked, with grooves on its surface. During summer, great auk plumage showed a white patch over each eye. During winter, the great auk lost these patches, instead developing a white band stretching between the eyes. The wings were only 15 cm long, rendering the bird flightless. Instead, the great auk was a powerful swimmer, a trait that it used in hunting. Its favourite prey were fish, including Atlantic menhaden and capelin, and crustaceans. Although agile in the water, it was clumsy on land. Great auk pairs mated for life. They nested in extremely dense and social colonies, laying one egg on bare rock. The egg was white with variable brown marbling. Both parents participated in the incubation of the egg for around 6 weeks before the young hatched. The young left the nest site after 2–3 weeks, although the parents continued to care for it.

The great auk was an important part of many Native American cultures, both as a food source and as a symbolic item. Many Maritime Archaic people were buried with great auk bones. One burial discovered included someone covered by more than 200 great auk beaks, which are presumed to be the remnants of a cloak made of great auk skins. Early European explorers to the Americas used the great auk as a convenient food source or as fishing bait, reducing its numbers. The bird’s down was in high demand in Europe, a factor that largely eliminated the European populations by the mid-16th century. Scientists soon began to realize that the great auk was disappearing and it became the beneficiary of many early environmental laws, but this proved ineffectual.

Its growing rarity increased interest from European museums and private collectors in obtaining skins and eggs of the bird. On 3 June 1844, the last two confirmed specimens were killed on Eldey, off the coast of Iceland, ending the last known breeding attempt. Later reports of roaming individuals being seen or caught are unconfirmed. A record of one great auk in 1852 is considered by some to be the last sighting of a member of the species. The great auk is mentioned in several novels and the scientific journal of the American Ornithologists’ Union is named The Auk in honour of this bird.