Fire damages the top part of the Eiffel Tower. 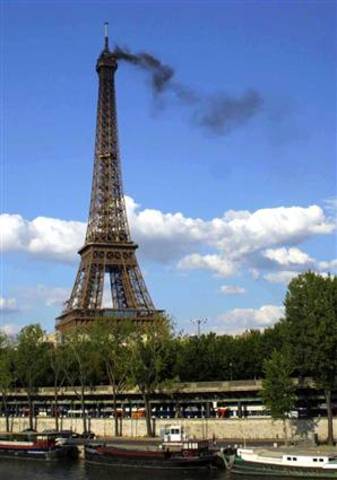 An electrical fire briefly engulfed a top corner of the Eiffel Tower today, startling tourists and alarming people across the city.

There were no injuries and the fire was quickly extinguished. But the image of thick white smoke pouring from the city’s signature landmark was nonetheless unsettling after months of periodic terrorist threats in the French capital. Nearly a decade ago, French commandos foiled a plot by Algerian hijackers to fly a plane into the tower.

Commandant Christian Decolloredo, a spokesman for the Paris Fire Department, said the blaze was an ”electrical wire fire in a standard equipment room.”

The fire broke out at 7:21 p.m. in an area off limits to tourists. It started as a wisp of white smoke and quickly spread until orange flames could be seen from the ground. Cherry Quevy, 27, on vacation with her family, caught the fire on video while filming the top of the tower. People on the video could be seen dashing back and forth on the top outdoor observation deck, partly obscured by the smoke and flames.

”They were yelling at me to go down, and grabbed my arm and put me in front of the stairs,” said Jasper Noltes, 22, a student from the Netherlands.

About 125 firefighters and 20 fire trucks responded to the blaze and a red Civil Security helicopter circled the tower, filming the fire, which was put out in about an hour. The grounds beneath and surrounding the tower were cordoned off by the police. Many firefighters used the tower’s elevators, which are designed to work even during a fire.

Continue reading the main story
It was not the first blaze at the tower, which opened in 1889. A safety net caught fire in 2000, and there was a kitchen fire in a lower-level restaurant in 1998. On Jan. 3, 1956, a fire in a television transmitter swept through the top of the tower.

City officials said the tower would be open on Wednesday.

Frank Engelan, 23, a physical education teacher from the Netherlands, said he saw a visitor arguing to be allowed up to the top because he had paid 3.20 euros, about $3.60, for the elevator ride.

”I’m very disappointed,” said Mr. Engelan, who is to leave Paris on Wednesday. ”I want my money back, too.”

Share on Facebook Share
Share on TwitterTweet
Share on LinkedIn Share
Famous Words of Inspiration...
"It was by the sober sense of our citizens that we were safely and steadily conducted from monarchy to republicanism, and it is by the same agency alone we can be kept from falling back."
Thomas Jefferson
— Click here for more from Thomas Jefferson