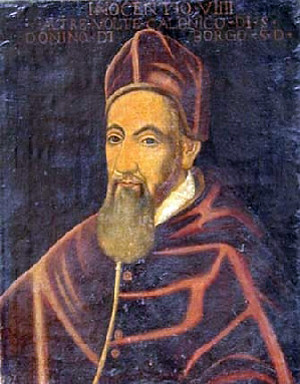 Prior to his short papacy, he had been a canon lawyer, diplomat, and chief administrator during the reign of Pope Gregory XIV (1590–1591).

Even before Pope Gregory XIV died, Spanish and anti-Spanish factions were electioneering for the next pope. Philip II of Spain’s (1556–1598) high-handed interference at the previous conclave was not forgotten: he had barred all but seven cardinals. This time the Spanish party in the College of Cardinals did not go so far, but they still controlled a majority, and after a quick conclave they raised Facchinetti to the papal chair as Pope Innocent IX. It took three ballots to elect him as pope.

The cardinal protdeacon Andreas von Austria crowned Innocent IX as pontiff on 3 November 1591. He elevated two cardinals to the cardinalate in the only papal consistory of his papacy on 18 December 1591.

Mindful of the origin of his success, Innocent IX supported, during his two months’ pontificate, the cause of Philip II and the Catholic League against Henry IV of France (1589–1610) in the French Wars of Religion (1562–1598), where a papal army was in the field. Death, however, did not permit the realisation of Innocent IX’s schemes.

His great-nephew Giovanni Antonio Cardinal Facchinetti de Nuce, juniore, was one of two cardinals appointed during the weeks of Innocent IX’s pontificate. A later member of the Cardinalate was his great-grandnephew Cesare Facchinetti (made a Cardinal in 1643).