The Beatles perform their last concert at Candlestick Park in San Francisco. 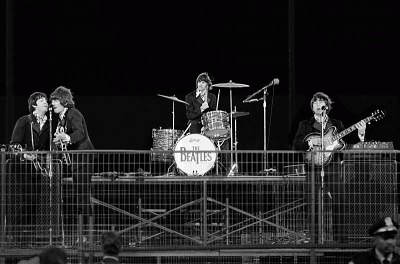 Although they made an unannounced live appearance in January 1969 on the rooftop of the Apple building, The Beatles’ final live concert took place on 29 August 1966 at Candlestick Park in San Francisco, California.

The Beatles took 65% of the gross, the city of San Francisco took 15% of paid admissions and were given 50 free tickets. This arrangement, coupled with low ticket sales and other unexpected expenses resulted in a financial loss for Tempo Productions.

Candlestick Park was the home of the baseball team the San Francisco Giants. The stage was located just behind second base on the field, and was five feet high and surrounded by a six-foot high wire fence.

The compère was ‘Emperor’ Gene Nelson of KYA 1260 AM, and the support acts were, in order of appearance, The Remains, Bobby Hebb, The Cyrkle and The Ronettes. The show began at 8pm.

The Beatles took to the stage at 9.27pm, and performed 11 songs: Rock And Roll Music, She’s A Woman, If I Needed Someone, Day Tripper, Baby’s In Black, I Feel Fine, Yesterday, I Wanna Be Your Man, Nowhere Man, Paperback Writer and Long Tall Sally.

The group knew it was to be their final concert. Recognising its significance, John Lennon and Paul McCartney took a camera onto the stage, with which they took pictures of the crowd, the rest of the group, and themselves at arm’s length.