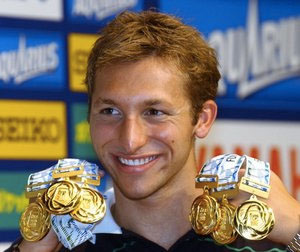 With the 2001 Australian Championships held in Hobart in March, Thorpe added the 800 m freestyle to his repertoire, after FINA had added the event for the 2001 World Aquatics Championships. Thorpe began his campaign by successfully defending his 400 m title with a time just 0.17 s outside his world record. The following night in the 800 m event, he drew away from Hackett in the last 100 m to break Kieren Perkins’ 1994 world record by over four seconds. He earned his third title by cutting 0.66 s from van den Hoogenband’s 200 m world record to set a new mark of 1 min 44.69 s. This performance made him the third male after John Konrads and Tim Shaw to hold world records over three distances simultaneously. His subsequent victory in the 100 m freestyle in a new personal best of 49.05 s made him the first since Konrads in 1959 to hold all Australian freestyle titles from 100 m to 800 m. This indicated that he could swim faster at the subsequent World Championships in Fukuoka, where he was looking to regain the ascendancy from van den Hoogenband.

Thorpe arrived in Fukuoka having been chosen by broadcaster TV Asahi as the marketing drawcard of the event. With the 4 × 100 m freestyle relay being held after the 400 m freestyle on the first night, Thorpe appeared to be conserving energy when he reached the 200 m mark two seconds outside his world record. Although he was 0.93 s behind at the final turn, a final 50 m burst in 24.36 s saw him cut a further 0.42 s from his world record. The relay saw him dive in fractionally ahead of American Jason Lezak after Klim, Callus and Pearson had completed the first three legs. Thorpe fell behind in the early half of the leg before kicking away in the closing stages, to seal gold with his fastest-ever relay split of 47.87 s. In the 800 m final, he shadowed Hackett for the first 750 m, staying within a body length. He then broke clear to win by a body length, lowering his world record by over two seconds. The 200 m freestyle rematch with van den Hoogenband provided Thorpe with a chance to rectify his strategy from the Olympics; this time he allowed the Dutchman to lead through the first 100 m. Thorpe pulled even at the 150 m mark and then broke away towards the finishing wall two body lengths clear. He lowered his world record to 1 min 44.06 s in the process, prompting van den Hoogenband to raise his arm aloft. Thorpe’s winning streak was interrupted in the 100 m freestyle when his personal best of 48.81 s placed him fourth, but he returned to form in the 4 × 200 m freestyle relay. Anchoring the team of Klim, Hackett and Kirby, the Australians lowered their world record time by more than two seconds, leaving the Italians more than six seconds in arrears. Having overtaken Klim as Australia’s leading 100 m freestyle swimmer, Thorpe was entrusted with anchoring the 4 × 100 m medley relay team on 28 July. After Matt Welsh, Regan Harrison and Geoff Huegill had finished their legs, Thorpe’s change left him half a body length behind the new 100 m world champion Anthony Ervin of the United States. The Americans were expected to win, and with his typically slow start, Thorpe turned a body length behind with 50 m remaining. With an American victory seeming inevitable, Thorpe managed to accelerate and deprive Ervin of the lead in the last 5 m. This made Thorpe the only swimmer to have won six gold medals at a World Championships, and the first since Shaw in 1974 to win the 200–400–800 treble. His performances formed the basis for Australia’s gold medal win over the United States 13–9. It was also the first time since the 1956 Summer Olympics that Australia had topped the medal tally at a global meet. Thorpe’s achievements led to predictions that he could match Mark Spitz’s seven gold medals at the 1972 Summer Olympics, which he played down.