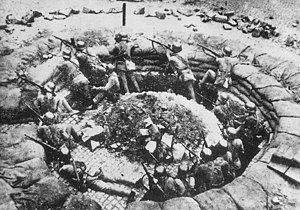 This article is about the 1937 battle. For the 1932 Japanese attack on Shanghai, see January 28 incident. For other uses, see Battle of Shanghai.
The Battle of Shanghai was the first of the twenty-two major engagements fought between the National Revolutionary Army of the Republic of China and the Imperial Japanese Army of the Empire of Japan at the beginning of the Second Sino-Japanese War. It was one of the largest and bloodiest battles of the entire war, described as “Stalingrad on the Yangtze”.

Since the Japanese invasion of Manchuria in 1931 followed by the Japanese attack of Shanghai in 1932, there had been ongoing armed conflicts between China and Japan without an official declaration of war. These conflicts finally escalated in July 1937, when the Marco Polo Bridge Incident triggered the full invasion from Japan. Dogged Chinese resistance at Shanghai was aimed at stalling the rapid Japanese advance, giving much needed time for the Chinese government to move vital industries to the interior, while at the same time attempting to bring sympathetic Western powers to China’s side. During the fierce three-month battle, Chinese and Japanese troops fought in downtown Shanghai, in the outlying towns, and on the beaches of the Yangtze River and Hangzhou Bay, where the Japanese had made amphibious landings.

The Chinese soldiers had to rely primarily on small-caliber weapons in their defense of Shanghai, against an overwhelming Japanese onslaught of air, naval, and armored striking power. In the end, Shanghai fell, and China lost a significant portion of its best troops, while also failing to elicit any international intervention. The resistance of Chinese forces, however, shocked the Japanese, who had been indoctrinated with notions of cultural and martial superiority, and dramatically demoralized the Imperial Japanese Army.

The battle can be divided into three stages, and eventually involved nearly one million troops. The first stage lasted from August 13 to August 22, 1937, during which the NRA attempted to eradicate Japanese troop presence in downtown Shanghai. The second stage lasted from August 23 to October 26, 1937, during which the Japanese launched amphibious landings on the Jiangsu coast and the two armies fought a Stalingrad-type house-to-house battle, with the Japanese attempting to gain control of the city and the surrounding regions. The last stage, ranging from October 27 to the end of November 1937, involved the retreat of the Chinese army in the face of Japanese flanking maneuvers, and the ensuing combat on the road to China’s capital, Nanjing.