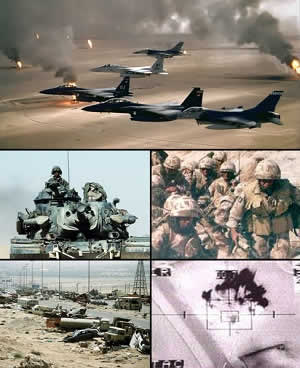 The Gulf War is a well known conflict that occurred in the early 1990’s between Iraq and a coalition of forces led by the United States. To many the Gulf War is known as the Persian Gulf War, but over time it was abbreviated by dropping the word Persian at the start.The Gulf War started on August 2nd in the year 1990 and officially finished on February 28th 1991, although the conflict carried on for another four years thereafter.

After the Iran-Iraq War the country of Iraq was essentially bankrupt. This position meant that Iraq asked for fellow countries Saudi Arabia and Kuwait to forgive the debt it owed to them as payment for Iraq stopping Iran from pushing its way through the Middle East. Both Saudi Arabia and Kuwait declined and said they still wanted payment which infuriated Iraq.Iraq also believed that Kuwait was drilling for more oil than its allowed OPEC quota, thus driving the price of oil to really low levels. This compounded Iraq economic issues further because the Iraq economy was heavily reliant on oil as its means of export.

Iraq went further in asking for countries to reduce their quotas to drive up oil prices so it could bolster the Iraqi economy, Kuwait responded by asking if they could increase their quota by 50%. Iraq was incensed by this move.
Further to all of this Iraq was also lodging a complaint that Kuwait was drilling at an angle over the Iraqi border thus stealing Iraqi oil too, something that threatened tensions further.