The Endangered Species Act is passed in the USA. 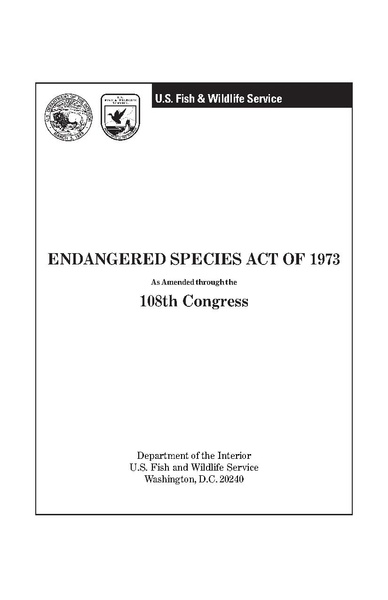 The Endangered Species Act of 1973 is one of the few dozens of US environmental laws passed in the 1970s, and serves as the enacting legislation to carry out the provisions outlined in The Convention on International Trade in Endangered Species of Wild Fauna and Flora. Designed to protect critically imperiled species from extinction as a “consequence of economic growth and development untempered by adequate concern and conservation”, the ESA was signed into law by President Richard Nixon on December 28, 1973. The U.S. Supreme Court found that “the plain intent of Congress in enacting” the ESA “was to halt and reverse the trend toward species extinction, whatever the cost.” The Act is administered by two federal agencies, the United States Fish and Wildlife Service and the National Oceanic and Atmospheric Administration.

President Richard Nixon declared current species conservation efforts to be inadequate and called on the 93rd United States Congress to pass comprehensive endangered species legislation. Congress responded with a completely rewritten law, the Endangered Species Act of 1973, which was signed by Nixon on December 28, 1973. It was written by a team of lawyers and scientists, including Dr. Russell E. Train, the first appointed head of the Council on Environmental Quality, an outgrowth of the National Environmental Policy Act of 1969. Dr. Train was assisted by a core group of staffers, including Dr. Earl Baysinger at EPA, Dick Gutting, and Dr. Gerard A. “Jerry” Bertrand, a marine biologist by training, who had transferred from his post as the Scientific Adviser to the U.S Army Corps of Engineers, office of the Commandant of the Corps, to join the newly formed White House office. The staff, under Dr. Train’s leadership, incorporated dozens of new principles and ideas into the landmark legislation, crafting a document that completely changed the direction of environmental conservation in the United States. Dr. Bertrand is credited with writing the most challenged section of the Act, the “takings” clause – Section 2.

The ESA is administered by two federal agencies, the United States Fish and Wildlife Service and the National Oceanic and Atmospheric Administration. NOAA handles marine species, and the FWS has responsibility over freshwater fish and all other species. Species that occur in both habitats  are jointly managed.

In March 2008, The Washington Post reported that documents showed that the Bush Administration, beginning in 2001, had erected “pervasive bureaucratic obstacles” that limited the number of species protected under the act: