The French accept the surrender of a British Navy fleet during the Battle of Grand Port. 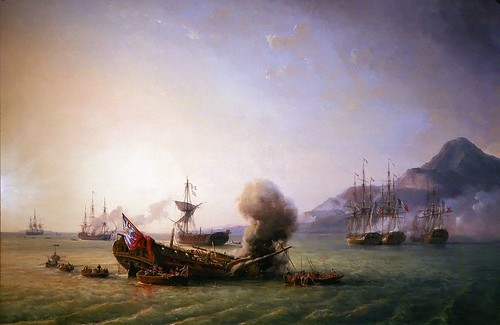 The Naval Battle of Grand Port marked a decisive turn in the colonial history of Mauritius.The island occupied a key position in the Indian Ocean and was much coveted by some rival European nations fighting to establish their supremacy in the region during the colonial period.

In 1810 Britain, which had gradually reinforced its military presence in the Mascarenes to protect its interests, launched an attack at Grand Port against the French who settled in Mauritius to take possession of the island.

After being colonised and abandoned by the Dutch, the island passed under French dominion in 1715. Notable French governor Mahé de La Bourdonnais, who greatly marked the history of Mauritius by his extensive development of the colony, used Mauritius as a naval base to lead military expeditions to support French troops in India who were fighting the British.

Wealthy French traders of the island called “negociants” armed cargo ships for corsair operations. Corsairs in Mauritius (which was named Isle de France by the French) attacked defenseless British merchant vessels and looted their precious cargoes loaded in India for trading in Europe. These attacks severely disrupted British trade in the Indian Ocean as well as disturbing the reinforcement of the growing British Indian Army. On their return route from Britain to India, these ships often carried British soldiers.

The corsairs were granted written legal authorisations or “Lettres de marques” by French governor Malartic which demarked them from pirates.

Following the outbreak of the Napoleonic Wars in 1803, the security of these routes became a high priority for the British Admiralty. To protect their interests, the British gradually increased their naval superiority in the region.