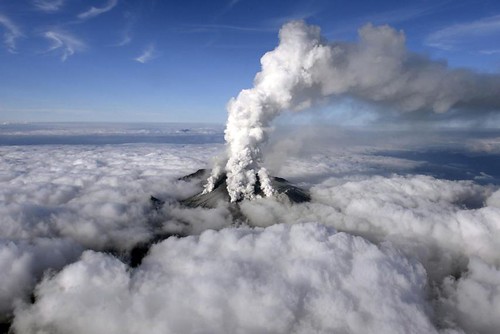 The volcanic eruption happened at 11:52 Japan Standard Time. There were no significant earthquakes that might have warned authorities in the lead up to the phreatic eruption—caused by ground water flashing to steam in a hydrothermal explosion. The mountain is a popular tourist attraction for hikers, being considered good for beginner climbers and relatively safe, and the weather was also good, so there were several hundred people on its slopes at the time.The police said that they were searching for people remaining on the mountain. By 17:00 the police reported that three people were missing and were believed to be under ash. Another person was rescued from under the volcanic ash, but remained unconscious. Six people were injured, one by flying rocks.

On September 28, the police reported that over 30 people had been found in “cardiac arrest” near the summit. Japanese emergency services often refer to people who show no vital signs, and are apparently dead, as being in cardiac arrest, as legally, only an authorised physician can pronounce a person dead.

By September 29, a total of 36 bodies had been found, and 12 people had been pronounced dead; the search was suspended due to dangerous conditions, including hydrogen sulfide gas spewing from the mountain. On September 30, fears of escalating volcanic activity on Mount Ontake continued to hinder rescue efforts.