South African Airways Flight 295 crashes all on board were killed. 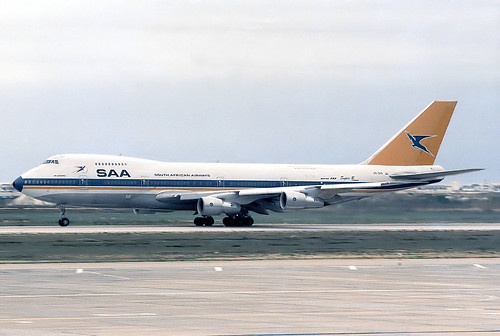 South African Airways Flight 295, a Boeing 747 named Helderberg, was a commercial flight from Taiwan to South Africa that suffered a catastrophic in-flight fire in the cargo area and crashed into the Indian Ocean east of Mauritius on 28 November 1987, killing everyone on board. An extensive salvage operation was mounted to try to recover the flight data recorders, one of which was recovered from a depth of 4,900 metres (16,100 ft)—the deepest successful salvage operation ever conducted.

The official inquiry, headed by Judge Cecil Margo, was unable to determine the cause of the fire, leading to a number of conspiracy theories being advanced in the following years.

South African Airways Flight 295 was a Boeing 747-200B Combi, named The Helderberg that was delivered to the airline in 1980. The aircraft took off on 27 November 1987 from Taipei Chiang Kai Shek International Airport, on a flight to Johannesburg via Mauritius. Dawie Uys served as the captain of the flight.

The Boeing 747-200B Combi is a variant of the aircraft that permits the mixing of passengers and airfreight on the main deck according to load factors on any given route and Class B cargo compartment regulations. Flight 295 had 140 passengers and six pallets of cargo on the main deck. The master waybills stated that 47,000 kilograms of baggage and cargo were loaded on the plane. A Taiwanese customs official performed a surprise inspection of some of the cargo; he did not find any cargo that could be characterised as suspicious.

At some point during the flight, a fire developed in the cargo section on the main deck; the fire was probably not extinguished before impact. The ‘smoke evacuation’ checklist calls for the aircraft to be depressurised, and for two of the cabin doors to be opened. No evidence exists that the checklist was followed, or the doors opened. A crew member might have gone into the cargo hold to try to fight the fire. A charred fire extinguisher was later recovered from the wreckage on which investigators found molten metal.