"Who's Afraid of the Big Bad Wolf?" is a popular song written by Frank Churchill with additional lyrics by Ann Ronell,[1] which originally featured in the 1933 Disney cartoon Three Little Pigs, where it was sung by Fiddler Pig and Fifer Pig (voiced by Mary Moder and Dorothy Compton, respectively)[2] as they arrogantly believe the Big Bad Wolf (voiced by Billy Bletcher) is not a serious threat.[2] The song's theme made it a huge hit during the 1930s and it remains one of the most well-known Disney songs, being covered by numerous artists and musical groups. Additionally, it was the inspiration for the title of Edward Albee's 1963 play Who's Afraid of Virginia Woolf?

The song was reused in the sequels to Three Little Pigs, and its writing was re-enacted in the "Cavalcade of Songs" episode on the Disneyland television series in 1955.[3] It featured in the Sing Along Songs video I Love to Laugh and has been included in numerous Disney recordings.

Disneyland Records produced a re-recording of the song in 1958, released concurrently as a single in Disney's "Wonderful Records" series of 45s and on the Mickey Mouse Club LP "Four Disney Stories," conducted by Tutti Camarata. It was a re-enactment of the original cartoon in audio, with noticeable differences being all three pigs voiced by Gloria Wood (unlike the originals, where Practical Pig was voiced by Pinto Colvig), the Big Bad Wolf having a more menacing voice (this time by Jimmy MacDonald), and a few additional verses and dialogue that was not present in the original cartoon. This version was also released on an album in the early 1960s entitled "The Story and Songs of Walt Disney's Three Little Pigs" and a few other compilation albums, and also included on Disney's read-along book-and-audio adaptations of the cartoon.

"Who's Afraid of the Big Bad Wolf?" was covered by American rapper LL Cool J on the Disney album Simply Mad About the Mouse: A Musical Celebration of Imagination. It was released as a single in 1991 for Columbia Records and was produced by DJ Eddie F and LL Cool J. It sampled Michael Jackson's "Billie Jean".[4] LL Cool J's version did not make it to the Billboard charts. 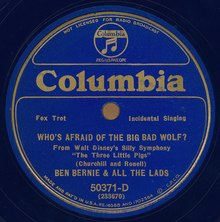 Charlie and his Orchestra recorded a German version in English during World War II with propaganda lyrics.

The song has been covered by many artists, including:[1]