The Bubonic plague breaks out in San Francisco. 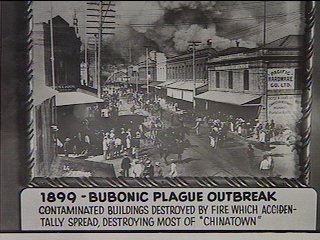 In the summer of 1899, a ship sailing from Hong Kong to San Francisco had had two cases of plague on board. Because of this, although no passengers were ill when the ship reached San Franscisco, it was to be quarantined on Angel Island. When the boat was searched, 11 stowaways were found the next day two were missing. Their bodies were later found in the Bay, and autopsy showed they contained plague bacilli. Despite this scare, there was no immediate outbreak of disease. But rats from the ship probably had something to do with the epidemic that hit San Francisco nine months later.

On March 6, 1900, a city health officer autopsied a deceased Chinese man and found organisms in the body that looked like plague. In 1894, two research physicians had simultaneously and independently identified the bacillus that causes bubonic plague. Shibasaburo Kitasato published his findings in Japanese and English; Alexandre Yersin published in French. People in different parts of the world credited one or the other with the discovery, depending which journals they had read. That the plague had an identifiable “germ” was known. But other recent findings had not been disseminated — or believed. Most people felt that the germ infected humans through food or open wounds. Disinfection campaigns were the order of the day. In some places they ran carbolic acid through sewers, actually spreading the disease faster because it flushed out rats that had lived there.