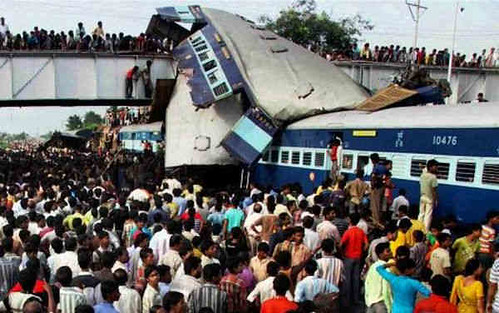 At least 150 people were feared killed and 250 injured in a train accident between Kaudi and Daudpur villages near Khanna railway station on the Khanna-Ludhiana section of the Northern Railway in Punjab, a couple of hours before dawn today.

The accident occurred at about 0315 hours IST when the Calcutta-bound 3152-down Jammu Tawi-Sealdah Express rammed into 10 derailed coaches of the Amritsar-bound 2903-up Frontier Mail (recently renamed the Golden Temple Express).

Ten coaches of the Frontier Mail got decoupled from the train and derailed, six of them falling onto a parallel track where they were hit by the oncoming Sealdah Express even as passengers were alighting from the other four coaches.

Northern Railway General Manager V K Mehta said there was “a gap of just one minute” between the Frontier Mail coaches getting derailed and the Sealdah Express ramming into them.
Driver Subhash Chander and co-driver Sewa Ram Murti of the Sealdah Express were among those killed.

Railway and police officers said 101 bodies had been extricated, but feared that at least 50 more could be trapped in the wreckage.The extricated bodies were removed to A S College at Khanna. The deputy commissioner of Ludhiana district has permitted relatives of the victims to take the bodies away for last rites without post-mortems.

Railway Minister Nitish Kumar, who visited the site, said it was yet to be ascertained if decoupling had led to derailment or vice-versa.He said the toll could go up as some of the injured passengers are in a critical condition, with multiple head and chest injuries.The commissioner of railway safety has been asked to ascertain the cause of the accident.

Kumar declined to speculate on the possibility of sabotage, saying this would be known only after the inquiry. But Punjab Director General of Police P C Dogra ruled out sabotage. He said preliminary investigations had revealed that the accident was caused by a mechanical failure.

The accident occurred on the electrified track in Ambala division, but both trains were being hauled by diesel engines.