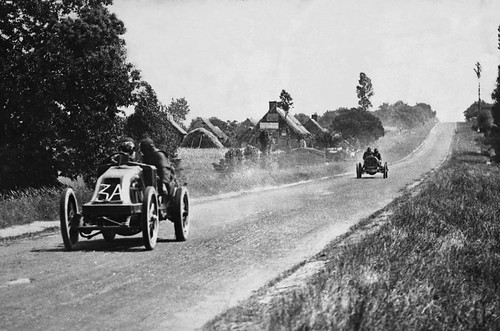 The series we now know as Formula One traces its roots back to 1906. Before the term, Formula One, was coined in 1950, essentially the same sequence of events were called the Grand Prix Series. But those words became bandied about so much that different ones were needed to describe the contest for the World Driving Championship. Nevertheless, each country’s race is still called a Grand Prix.

The very first Grand Prix took place on June 26 and 27, 1906. The venue was public roads in the vicinity of Le Mans, France near the Sarthe River, so it became known as the Sarthe Circuit. Previously, the only series that could be called international was the Gordon Bennett, established by James Gordon Bennett, Jr., owner of the New York Herald. . Entrants came from a number of European countries that had national teams. Each country could enter only three cars and they had to be made in that country. There were no mechanical or physical limitations placed on the cars.

At that time, France had quite a number of car makers and they objected to being allowed only three entries from each country. To top it off, the Germans got six because Mercedes had an additional factory in Austria. The new series—Grand Prix—had no such requirement. The cars, however, had to adhere to a formula. At the 1906, the cars couldn’t weigh more than 1,000 kilograms. Other than that, there were no other limitations.

Course map of the first Grand PrixThis first Grand Prix was organized by the Automobile Club of France (ACF) at the urging of French automakers. The city fathers of Le Mans and local hotels provided the necessary funding and persuaded the ACF to hold the race near the city. The course was laid out by the Automobile Club de la Sarthe over 64.11 miles of local roads. The route was roughly triangular with each leg approximately 20 miles long. Sharp corners were at the apexes of the triangle.