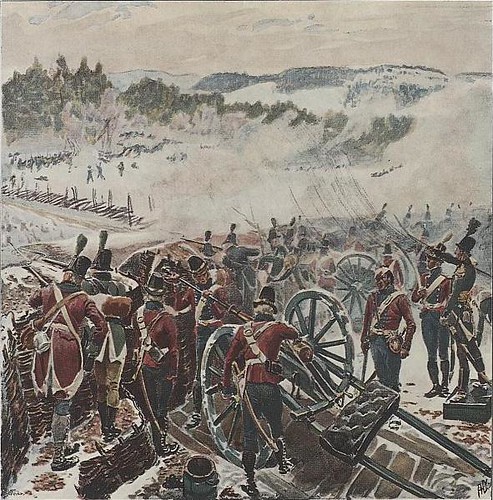 The Swedish–Norwegian War, also known as the Campaign against Norway, War with Sweden 1814, or the Norwegian War of Independence; was a war fought between Sweden and Norway in the summer of 1814. The war resulted in Norway entering into union with Sweden, but with its own constitution and parliament.

The hostilities opened on 26 July with a swift Swedish naval attack against the Norwegian gunboats at Hvaler. The Norwegian army was evacuated and the vessels managed to escape, but they did not take part in the rest of the war. The main Swedish offensive came across the border at Halden, bypassing and surrounding the fortress of Fredriksten, and then continuing north, while a second force of 6,000 soldiers landed at Kråkerøy outside of Fredrikstad. This town surrendered the next day. This was the start of a pincer movement around the main part of the Norwegian army at Rakkestad.

On the front towards Kongsvinger the forces were more evenly matched, and the Norwegian army eventually stopped the Swedish advance at Lier on 2 August, and won another victory at Matrand on 5 August. On 3 August, King Christian Frederick reached the front at Østfold and was persuaded to change his strategy and use the 6,000 men stationed at Rakkestad in a counterattack against the Swedes. The order to counterattack was given on the 5th of August, but the order was recalled a few hours later. The Norwegian forces therefore withdrew over the Glomma river at Langnes in Askim. The last major battle of the war was fought on 9 August at the bridgehead at Langnes, where the Swedish forces once more were driven back. Sweden then attempted to outflank the Norwegian line, and successfully did so during the battle of Kjølbergs bro on the 14th of August. The Swedes then had a clear path to Kristiania, the Norwegian capital, which made the Norwegian situation unsustainable.

Although the Norwegian Army had won at Langnes, it was nevertheless clear to both the Norwegian and Swedish military authorities that a defeat was inevitable. Even as they had managed to deliver several minor offensive blows to the Swedes, thus applying pressure on the Swedes to accept Norway as a sovereign nation, it was considered impossible to try to stop the Swedes in the long run. The Swedish offer of negotiations was therefore accepted as the war had put a heavy strain on the Norwegian finances. Every day of delay in securing Norway by the Swedes brought uncertainty to them regarding the outcome, so both parties were interested in a quick end to the war.

Share on Facebook Share
Share on TwitterTweet
Share on LinkedIn Share
Famous Words of Inspiration...
"Pacifism is objectively pro-fascist. This is elementary common sense. If you hamper the war effort of one side, you automatically help out that of the other. Nor is there any real way of remaining outside such a war as the present one. In practice, 'he that is not with me is against me.'"
George Orwell
— Click here for more from George Orwell