The St Katharine Docks are opened in London. 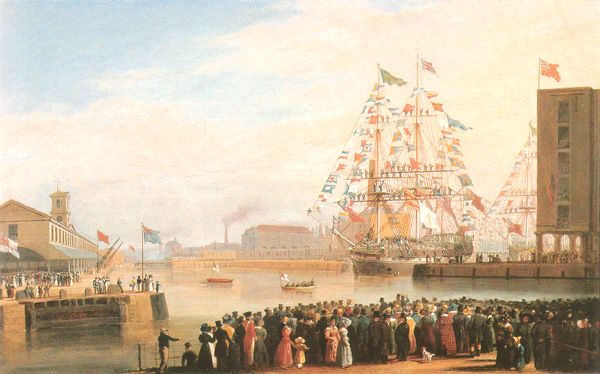 The ‘Elizabeth’ entering the St Katharine Docks on the opening day in 1828. The docks had over a million square feet of storage area to house items such as tea, rubber, wool, marble, ivory, tallow and turtle shell. Despite this, the docks were never a great financial success and were finally closed in 1968, having long run at a loss. They were sold by the Port of London Authority to the Greater London Council. St Katharine Docks, in the London Borough of Tower Hamlets, were one of the commercial docks serving London, on the north side of the river Thames just east of the Tower of London and Tower Bridge. They were part of the Port of London, in the area now known as the Docklands, and are now a popular housing and leisure complex.

Share on Facebook Share
Share on TwitterTweet
Share on LinkedIn Share
Famous Words of Inspiration...
"The fact is, that to do anything in the world worth doing, we must not stand back shivering and thinking of the cold and danger, but jump in and scramble through as well as we can."
Robert Cushing
— Click here for more from Robert Cushing