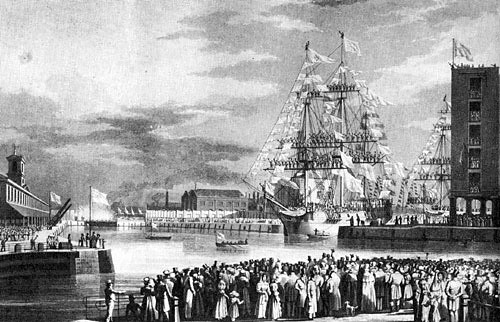 In 1805 the London dock was opened at Wapping, to ships from the Mediterranean, North Africa and the near Continental and coastal ports. It was followed in 1828 by the St. Katharine Dock built on the western side of the London Dock and hard up against the Tower of London. In 1864 the two proprietary companies amalgamated to form the London and St. Katharine Docks.

This complex of entrances, cuttings, quays and warehouses with a total area of 125 acres (water area 45 acres) and four miles of quays (26 berths for ships up to 360 ft. long) is to be sold by the owners, the Port of London Authority. The target set is September 30th, 1968, with all warehoused goods cleared by the end of the year.

These docks, known for a century and a-half throughout the Seven Seas, were built for permanence. Their builders knew nothing of ‘limited obsolescence’—putting up premises whose continued usefulness could be reviewed each decade. They built for the ships of the period whose average size was not, by 1844, more than 241 tons. Inexorably this has risen; by 1903 the average size of ocean-going ships was 1,300 tons, by 1950, 2,700 and by 1963, 3,700 tons.