Star Wars is released in theaters. 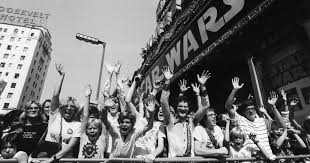 On May 25, 1977, a long time ago in a galaxy not so far away … the first film in the Star Wars series was released in movie theaters.

What has now grown into a franchise, spanning the worlds of film, books, TV, video games, toys, and more, started when the world met characters including Luke Skywalker, Princess Leia, R2-D2, Yoda, and Darth Vader in the original Star Wars film, created by George Lucas.

In 2015, a series of sequels began with Episode VII: The Force Awakens, followed by Episode VIII: The Last Jedi in 2017, and Episode IX is planned for release in 2019. There are also two Star Wars anthology films, 2016’s Rogue One and Solo: A Star Wars Story, which was released today, the 41st anniversary of the original premiere.

Star Wars has built a fan base larger and stronger than the Death Star itself, that celebrate the films with a fan holiday each May 4. Fans wish each other well by saying “May the 4th be with you” on what came to be known as Star Wars Day.

Many engineers can be found among those fans. The films have inspired many tech careers and analysis of devices, including blaster fire, featured in them.