Mother Teresa is honored with the Bharat Ratna which is India’s highest civilian award, 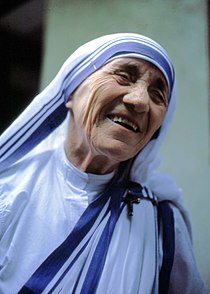 Bharat Ratna, the country’s highest civilian award instituted in 1954, is given in recognition of exceptional service, performance of the highest order in any field of human endeavour. Any person without distinction of race, occupation, position or sex is eligible for this award.

The recommendations for Bharat Ratna are made by the Prime Minister to the President. The number of annual awards is restricted to a maximum of three in a particular year.

On conferment of the award, the recipient receives a Sanad signed by the President and a medallion.

The award does not carry any monetary grant. The award cannot be used as a prefix or suffix to the recipient’s name.

However, should an award winner consider it necessary, he or she may use the following expression in their biodata or letterhead or visiting card etc. to indicate that he or she is a recipient of the award: ‘Awarded Bharat Ratna by the President’ or ‘Recipient of Bharat Ratna Award’.

Mother Teresa was awarded India’s highest civilian award, the Bharat Ratna, on January 25, 1980, for her humanitarian work. Born to an Albanian family in Macedonia, her original name was Agnes Gonxha Bojaxhiu. She left home at the age of 18 and came to India the following year. She founded a Roman Catholic religious congregation, Missionaries of Charity, in 1950.

Share on Facebook Share
Share on TwitterTweet
Share on LinkedIn Share
Famous Words of Inspiration...
"The chances are that you have already come to believe that happiness is unattainable. But men have attained it. And they have attained it by realising that happiness does not spring from the procuring of physical or mental pleasure, but from the development of reason and the adjustment of conduct to principles."
Arnold Bennett
— Click here for more from Arnold Bennett