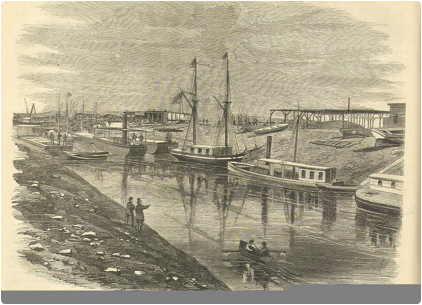 British and French engineers start work on the Suez Canal.

On 25th April, 1859, work started on the construction of the Suez Canal in Port Said, Egypt. Officially opened in November 1869, the 101 mile long canal is a vital trade route connecting the Mediterranean Sea to the Gulf of Suez in the Red Sea.

When the canal opened some ten years later, its construction had cost $100 million. The creation of the canal triggered the growth of settlements around the area of Suez. Previous to the commencement of the project, the arid territory had been largely uninhabited, but following the start of the construction more than 70,000 acres of land were brought under cultivation.

The Suez Canal was not the first attempt in history to connect the Mediterranean to the Red Sea. Canals had been constructed in the area in the thirteenth century BCE. During the Ptolemaic period of Ancient Egypt, a series of canals were used to facilitate trade through Egypt, however, over the course of the next thousand years they gradually fell into disrepair or were destroyed in military conflicts.The Suez Canal had a dramatic impact on world trade, allowing goods to be shipped across the globe in record time. In 1888, an international convention made the canal available for use by ships from any country.